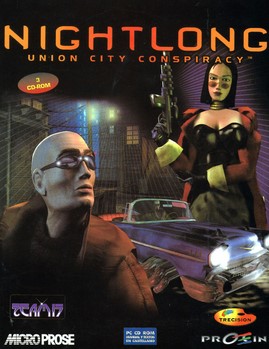 Nightlong: Union City Conspiracy is a cyberpunk-themed adventure game developed by Trecision, published by Team17 and distributued by MicroProse in Europe and DreamCatcher Interactive in North America.

The game takes place in the year 2099, and the player assumes the role of the top-notch investigator named Joshua Reev. His long-time friend, Hugh Martens, summons him to help him with a matter of major political importance. It seems that a group of terrorists are tearing the city to shreds, and Martens has called on Reev to put an end to the madness.

Nightlong is predominantly an inventory management type of game, with a few puzzles thrown in. The game has backgrounds that appear to be a mixture of texture-mapped and hand-drawn graphics. The game is played mostly from the third-person perspective, and game characters are cyberpuppets. Background music and sound effects are unobtrusive. The navigation interface uses left-click to examine an object, right-click to use, interact with or combine objects in the game or in inventory. Hotspots are indicated with on-screen text. Many of the game's plot elements rely on finding a single object. For this amount of pixel hunting, a large-screen monitor is recommended. An inventory bar is accessible at the bottom of the screen, and the Escape key is used for the game control menu. The Escape key can also be used to skip video and dialog sequences, and right-clicking on screen exits avoids waiting for character walking. Useful "Go to..." text indicates previously-unexplored exits. A handy instant-navigation feature is also available for part of the game.

The game is actually somewhat non-linear since some tasks can be solved in a different order, with the gameplay periodically simplified by one-way plot elements. There are only twelve saved-game slots, which may be too few for some players. However, multiple sets of saved games can be retained by manually copying SAVEGAME.* files from the game installation directory. An audible indication of the main character's shrug is needed so you have a better idea when nothing can be done with an inventory item or hotspot. There are few inventory red herrings since most of the stuff gets used at some point or other. Strong language appears at a few points in the game.