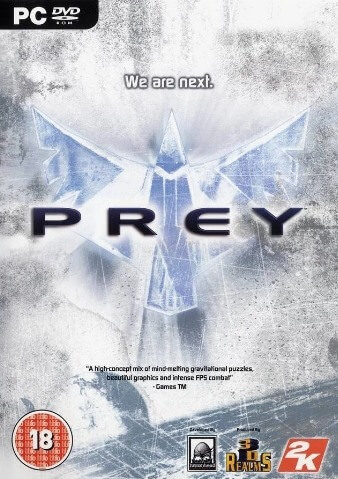 
Prey is a first-person shooter survival horror video game developed by Human Head Studios, under contract for 3D Realms, and published by 2K Games, while the Xbox 360 version was ported by Venom Games. The game was initially released in North America and Europe on July 11, 2006. Prey uses a heavily modified version of id Tech 4 to use portals and variable gravity to create the environments the player explores.

The game's story is focused on Cherokee Domasi "Tommy" Tawodi as he, his girlfriend, and grandfather are abducted aboard an alien spaceship known as The Sphere as it consumes material, both inanimate and living, from Earth in order to sustain itself. Tommy's Cherokee heritage allows him to let his spirit roam freely at times and come back to life after dying, which gives Tommy an edge in his battle against the Sphere.

Prey had been in development in one form or another since 1995, and has had several major revisions. While the general approach to gameplay, including the use of portals, remained in the game, the story and setting changed several times. The game received generally positive reviews and was a commercial success, selling more than one million copies in the first two months of its release and leading to the abortive development of a sequel.

Since then, the rights to Prey passed on to Bethesda Softworks, an American video game company known for their Elder Scrolls series. They released a reboot of the game in 2017. Arkane Studios, developers of the Dishonored video game franchise, and subsidiary of Bethesda, developed the reboot.

Prey is a survival horror first-person shooter with the player in control of the protagonist Tommy as he explores the gigantic extraterrestrial craft Sphere and fights its inhabitants aboard. During the game, the player will collect a number of alien weapons, some comparable to typical first-person shooter archetypes, others more alien in behavior.

The game's engine introduces two unique aspects to exploration. Portals in the game can transport the player from one area to another instantly; portals can be looked and shot through and can also be traveled in reverse. Unlike the later game Portal, the player cannot create portals directly without the use of mods, and portals remain fixed in space. The game also features variable gravity. Special paths allow the player to walk along them, remaining upright regardless of orientation, though should the player fall or voluntarily jump off the path, gravity will reassert itself. Small planetoids inside The Sphere can also exhibit their own gravity fields, allowing the player to walk completely around the outside of it.

The player can detach Tommy's spirit from his body, allowing the spirit to roam freely for a short time. The spirit has limited interaction with the environment, though it is able to activate control panels and can use a spirit bow to strike at foes. The spirit force is often used to solve environmental puzzles within the game as well as to locate paths that are not visible to mortal eyes. Although Tommy dies when his health is depleted, he is resurrected after a brief period during which his spirit can increase the health the revived body will have. Two vehicles make an appearance; one is a flying vehicle used frequently for travel and attacking (as well as puzzle solving), and one is only used for a short period near the end of the game.

The bar that the game begins in is interactive, with usable restroom facilities, a TV with various channels (including a clip from Duck and Cover), a fully playable Pac-Man-style game called Rune Man (referring to a previous game by Human Head entitled Rune), several video casino machines (including blackjack, draw poker, and a slot machine), and a jukebox that plays a small selection of licensed songs.