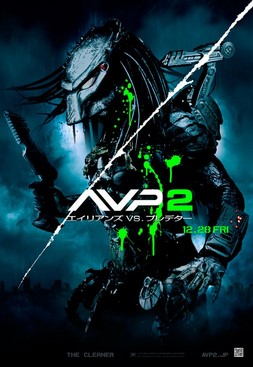 Aliens versus Predator 2 is a science fiction first-person shooter video game developed by Monolith Productions and published by Sierra On-Line for Microsoft Windows in 2001, and for Mac OS X in 2003. The game is a sequel to Aliens versus Predator (1999); both games are based on the characters of the Alien and Predator media franchises as well as the Alien vs. Predator crossover series. It is set on the fictional planet LV-1201.

The game is played from a first-person perspective. In the single-player mode, players control one of three characters, each with their own abilities and individual story modes. An online multiplayer mode, which allows players to play as one of four teams in competitive modes, is no longer officially supported and requires a community developed patch to enable multiplayer.

Like its predecessor, Aliens versus Predator 2 allows the player to choose one of three characters: an Alien, Predator, or human Colonial Marine. Each character has different objectives, abilities and weapons at their disposal. The single-player campaigns present the player with conventional series of levels that are designed around the abilities of each character.

As the Colonial Marine, the player uses a number of weapons to combat Aliens and Predators. The Marine wears armor for protection, and uses an image intensifier, flashlight, and flares to improve visibility in dark areas.

When playing as the Predator, the player uses a variety of weapons from the Predator films such as wrist blades, a throwing disc, and shoulder-mounted energy weapons. The Predator is more durable than the human or the Alien and can survive falls from greater heights than the human. It can use a cloaking device to become invisible and several different modes of vision to help in the detection of enemies, including infrared vision and a mode sensitive to electrical systems. Unlike in the previous game, the Predator in Aliens versus Predator 2 recharges its energy supply using a personal item.

As an Alien the player can explore most of the game's environments freely, even climbing across walls and ceilings. However, the Alien has no weapons and must use its claws, tail, and jaws to attack enemies. The player can also use a form of echolocation in dark areas and can detect pheromones to discern human or Predator enemies. The Alien can drop from any height without injury and is the fastest of the three player characters.

Aliens versus Predator 2 has several multiplayer modes which can be played through an internet or Local Area Network connection. In each game the player chooses one of four teams to play as: The Aliens, Predators, Marines, or corporate mercenaries (called "Iron Bears" in the game's storyline). Each team has unique abilities, advantages, and disadvantages. The Aliens are able to scale walls and ceilings and the Predators can become invisible, while the two human teams have a large array of heavy weapons as well as motion trackers.

There are six different multiplayer "modes" played on a number of "maps". "Deathmatch" mode is a free-for-all match in which the player's goal is to accumulate the highest number of kills. "Team Deathmatch" has the same goal except that the player is teamed with other players of the same species (or faction, in the case of the Colonial Marines and the Corporate Mercenaries). In "Hunt" there are two teams, one designated as the "hunter" and the other as the "prey"; the hunters accumulate points by killing the prey, while the prey can themselves become hunters by killing members of the hunter team. "Survivor" mode designates all players as "defenders" at the start; if a player is killed they become a "mutant" and can then earn points by killing defenders. Defenders gain points by staying alive without becoming mutants. "Overrun" is a timed match between two teams that is similar to "Survivor" except that each player has a finite number of lives; at the end of the round points are awarded based on the number of surviving members on each team. "Evacuation" is another two-team match with a finite number of lives, in which one team is designated as the "attackers" and the other as "defenders". The attacking team wins by killing all of the defenders, while the defending team wins by locating the map's evacuation point and having at least one member survive within it for ten seconds.

In November 2008, Sierra Entertainment shut down the master server browser for the game.

The Academy of Interactive Arts & Sciences nominated Aliens vs. Predator 2 for its 2001 "Computer Action/Adventure Game of the Year" and "Online Game Play of the Year" awards. However, it lost in both categories to Return to Castle Wolfenstein. Similarly, the editors of Computer Games Magazine nominated Aliens versus Predator 2 as the best action game of 2001, but ultimately gave the award to Operation Flashpoint: Cold War Crisis.