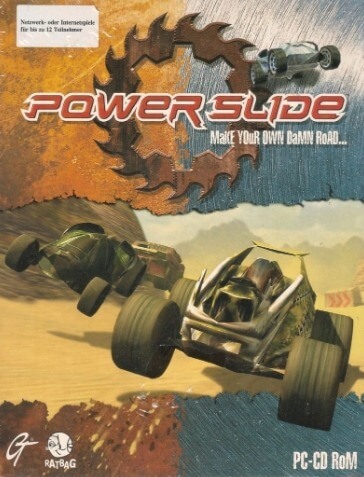 Powerslide is a post-apocalyptic Microsoft Windows racing game developed by the now defunct Australian developer Ratbag Games. It was released in Australia, United States, Japan and Europe in 1998. Powerslide was praised for its graphics and AI in particular, which were both impressive for their time. A sequel, Powerslide: Slipstream, was in development as of 2004, but Ratbag couldn't find a suitable publisher, and shortly after their company was shut down. Powerslide was re-released on GOG.com in 2012.

Powerslide is set in a dystopian future where the ozone layer has disintegrated, leading to worldwide poverty and a collapse of society. Society has rebuilt in two distinct factions - above and below ground. Below ground live the wealthy corporations, in a sterile and controlled environment, whilst above ground live feral communities.

The feral population have taken advantage of the abandoned roads and vehicles, joyriding through deserted streets and countryside, docklands, sewers, and multi-level parking lots. Known as "Powersliding" the races were originally held illegally by feral groups, however the underground corporations have now taken an interest in the sport as well.

Powerslide is set in the near future and is a "drive anywhere" arcade racer. There are three main modes: single race, time trial, and championship. Single races can be played on any unlocked track, solo or in online multiplayer. Records can be set in this mode, and saved. Time trials involve only a lone player in a sort of practice run for any given track. Championships consist of consecutive sets of tracks, mainly the Novice, Advanced, and Expert championships. The Insane level can be attempted if the Expert championship is completed.

The game is set in a "drive-anywhere" atmosphere, there are no invisible walls or track side facades holding the player back, allowing the player to explore the tracks at will during races, etc. Cheat codes, which can simply be typed in during a race, can be discovered by reaching out-of-the-way places across the tracks. By beating championships, new cars and tracks are unlocked. The supercar can be earned by beating the Expert championship.