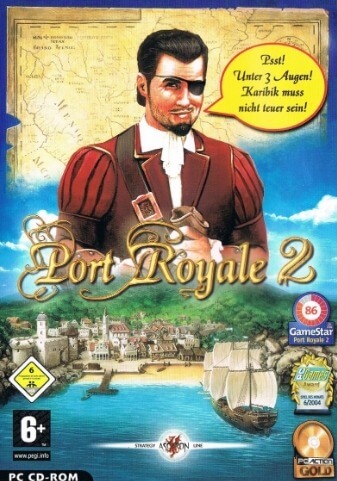 Port Royale 2 is the sequel to the business simulation game Port Royale: Gold, Power and Pirates. It is set in the Caribbean during the 17th century. Created by Ascaron Entertainment in 2004, it combines a business simulator with real-time battles and towns that can be owned, built, developed or razed.

Port Royale 2 is an open-ended game, so the player can choose to pursue any career they wish. This could range from a business tycoon to a pirate. Initially, you must trade goods between Caribbean colonies to make money, but over the long term you can have substantial business interests in many Caribbean ports, and support large fighting fleets.

As a business tycoon, you trade with towns to gain their friendship, and can then buy building permits to establish businesses there. Ultimately, you can even come to have your own town, but this can take a very long time.

As a buccaneer (with a Letter of Marque), you can attack any of the four colonial nations in the Caribbean circa 1600; from largest to smallest: Spain, England, France, and The Netherlands. If you have not acquired a Letter of Marque, every nation will see you as an enemy - you are a pirate.

Ships in this game range from a small Pinnace to a massive Ship of the Line. There are also missions you can complete for money, supplies, or improved relations. At higher levels you can also automate the game to some degree, by setting up trade routes that your trading fleets will follow from town to town.

True to history, home-country politics are fickle and impact the game: One year you might choose to be loyal to Spain and fight England–but a year later, might join the Dutch in their fight against the French.

Famous pirates of the age also make appearances. These sea wolves are likely to attack any ship or town that they please, including those that belong to the player. They usually operate from heavily fortified bases, but if you defeat them, you'll gain favor with any nation you choose.

Initially, you have operating constraints (how many fleets you may have and how many towns you can buy building permits in), but as you gain levels (based on net worth), you can have unlimited fleets and permits.

PC Format found the game unremarkable, stating that Port Royale 2 "...passes the time, but gets old fast." IGN was slightly more positive, saying it is "...a solid if unremarkable game." Because the game has an open ending, IGN said it had "good replay value as you can take different career paths each time you play." The game received praise from 1Up.com, which stated that: "...it's a continually engaging experience." However, they disliked the pace at the beginning, saying "Port Royale 2 is somewhat slow to start. It can take a long time to earn enough money..." GameSpot gave the game a solid 8.3/10, saying "Port Royale 2 might focus more on building shipping cartels than sea battles and swordplay, but its brilliantly realized design is more than just number crunching."

18 Wheels of Steel: Across America
USERS COMMENTS
Would be nice to let ppls know the game is in russian.  I did select english, but still got russian game.

Anno 1404
janice pigeon, 29.11.20
the iso is good, and correct torrent, but the game language is only on russian, from the installer to the menu and the game himself :(