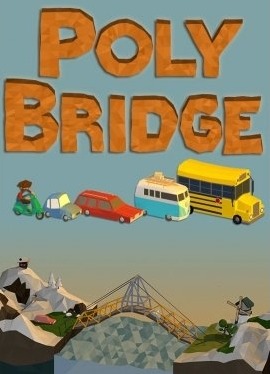 Poly Bridge is a bridge-building simulation-puzzle game, developed by New Zealand-based indie studio Dry Cactus with music by Canadian composer Adrian Talens, where players build bridges for vehicles to cross. Poly Bridge was released for Microsoft Windows on July 12, 2016, iOS on June 13, 2017. Steel, wood, rope, and cable can be combined and used to strengthen a designed bridge. The game is made more difficult with the availability of different building materials of different prices.

The objective of the game is for vehicles to traverse over a series of rivers by building bridges. That is done via 2D bridge model by creating a blueprint, and working with the materials which are given at use. Poly Bridge has a campaign mode with a series of scenarios that require different things to accomplish and introduce certain geographic features. In each level (more than 60 overall), there are two requirements: the building cost must come in under budget and the bridge has to be strong enough for a specific number of cars. There is also a sandbox mode that allows free building without restrictions, where the parameters can be set for creation. There is a variety of vehicles, ranging from motorcycles (fast and light) to wagons (slow and heavy). Since every vehicle has a different body and weight, that means longer cars may not be able to drive up steep slopes and the structure might need to adapt to the situation. The game also features obstacles such as jumps and boats, forcing the player to design their bridge creatively. A badly built bridge will collapse under the weight of a crossing vehicle. The game includes a GIF generator, allowing players to capture certain moments while playing and share them online.