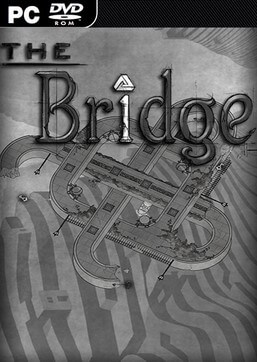 The Bridge is an indie video game designed by American indie developer Ty Taylor for Microsoft Windows, Linux, OS X, Amazon Fire TV, Android, Xbox 360, Xbox One, Ouya, PlayStation 3, PlayStation 4, PlayStation Vita, Wii U, and Nintendo Switch. In the game, the player controls an Escher-like character and the rotation of the 2D environment, which affects gravity based on the changing orientation of the landscape.

The game consists of various levels, the goal of which is to get the main character to the exit door. The game's puzzles are inspired by the art of M. C. Escher and like his artworks, each level unfolds in grayscale with hand-drawn illustrations. The player can rotate the world using the arrow keys, changing the gravitational direction of individual objects, or control the main character with A and D to go left and right. The Wii U version utilizes the GamePad touch and accelerometer. The player can use the Wii U GamePad touch capabilities to interact with the world to move the character, open doors, activate objects, and interact with the menu system and UI. The player can also tilt the Wii U GamePad to rotate gravity in the game.

The game opens with the nameless main character sleeping under an apple tree. After an apple hits him in the head and wakes him up, he is guided to his house with three doors, behind which lie further doors and levels. The story is explained through the environment and post-world text as the game progresses.

The Bridge received positive reviews from critics. It has an aggregate score of 72.63% on GameRankings and 74/100 on Metacritic. The game won the 2012 Indie Game Challenge award for Achievement in Art Direction and Achievement in Gameplay.

(0) Comments on "The Bridge Full Version"