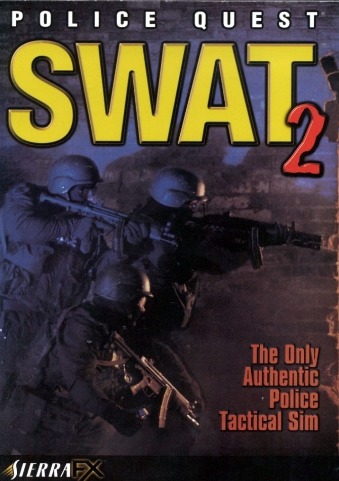 Police Quest: SWAT 2 (stylized as SWAT2) is a 1998 real-time tactics and police simulation video game released for Microsoft Windows. It is the sixth game in the Police Quest series. It uses an isometric projection camera view, somewhat similar to the squad-level real-time tactics video game in the mold of X-COM or Jagged Alliance games. Police Quest: SWAT 2's gameplay takes place in real-time, with the player issuing orders to individual avatars from a static isometric view of the level.

Many of Police Quest: SWAT 2's in-game missions were based on real life events, such as the North Hollywood shootout of February 1997, and a small-scale riot at a strip mall that can be seen as a parallel to the 1992 Los Angeles riots that followed the Rodney King beating incident. The game's soundtrack was composed by Jason Hayes and Chance Thomas, with the game's theme song being titled "Just Another Day in L.A.", performed by Utahn singer Randall "Randy" Porter, composed by Chance Thomas, and written by Susan Frischer. The lead designer was Susan Frischer.

Police Quest: SWAT 2's story takes place in Los Angeles, California and the surrounding metropolitan area in the game's then-future of 1999, and revolves around a fictional conflict between the Los Angeles Police Department and a fictional emerging left-wing domestic terrorist organization calling themselves the "Five Eyes", led by a mysterious figure named Basho, and his second-in-command, Dante.

As a homage, Sonny Bonds, the protagonist of the original Police Quest series, is one of the LAPD SWAT officers available for the player to send into missions during the LAPD SWAT campaign. Sonny's high initial stats, some of the best in the game, allow him to become certified as an element leader.

SWAT 2 received "average" reviews, much more positive than the previous two games, according to the review aggregation website GameRankings. The game still had several flaws, such as the overly complicated interface, micromanaging, an imperfect artificial intelligence, and a simple work-around of selling the sidearms of unused avatars that allowed players to ignore the budgeting and financial aspect of the game.