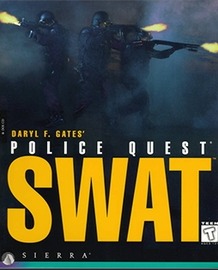 Police Quest: SWAT is the fifth game in the Police Quest series. It is graphic adventure game released in 1995, and re-released in 2016 for Steam. With extensive use of FMV videos for its basic gameplay, the game required four CD-ROMs.

In keeping with the strict realism of the previous series, the majority of the game is spent performing training exercises. In fact, there are only three actual missions in the game (a mentally ill grandmother, a barricaded fugitive, and a terrorist attack). The first mission is available after the player completes a single training exercise and then attends a tactical lecture. The second becomes available after completing the first. After successfully playing several variations of the first two, the third becomes available. To increase replay value, the missions play out slightly differently with each playthrough, though only a limited number of variations exist. The role the player takes during the last mission also differs based on the career path they have selected during training, acting either as an element leader, with a greatly expanded list of radio commands to direct their team, or as a sniper, with randomized wind conditions forcing the player to adjust his rifle scope to ensure an accurate shot.

During the training portion of the game, the player can make choices that lead to verbal reprimands. For example, if the player tries to 'skip' the briefings, the commander will scold the player. If the player is told to go to one location but then goes to another, someone there will warn "SWAT Pup" that he needs to be at the other location. If the player pesters other people at the various locations, by trying to talk to them too much or loitering, they may also get annoyed. Only shooting one's fellow officers in the few scenes in which this is possible will result in any form of disciplinary action, however, and this causes an immediate game over.

Verb/noun commands can be issued via the character's LASH radio which allows the player to request assistance from his teammates or, if acting as element leader, give them orders.

In-game items are kept in an inventory that functions like the inventory in other Sierra SCI adventure games of the era, though the only items the player will ever carry are tactical devices such as angled mirrors, flashbangs, gas masks and firearms. These are issued to the player automatically at the beginning of each mission.

The game is built on the SCI2 (Sierra Creative Interpreter) used in the previous Police Quest game, Open Season, and other adventure games of the era such as Phantasmagoria and Gabriel Knight 2. It utilizes a single cursor interface similar to these and other SCI2 games (see also King's Quest VII). The game utilizes much of the same technology as the previous game: most backgrounds are scanned photographs with green screen actors (with sprites being used in many places), but there is much more use of FMV.

The game is listed as Police Quest 5 (PQ5) in the file names, folder, and the credits. The number does not appear on the title screen. The full title Police Quest 5: SWAT also appears on the back of second Police Quest Collection it was first included in.