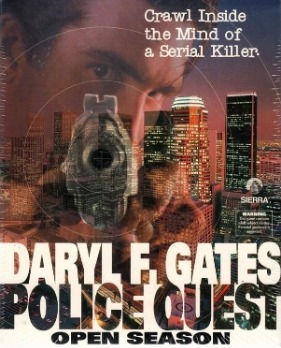 Police Quest: Open Season is the fourth installment of Sierra On-Line's popular Police Quest series. Released in November 1993, it was created by retired Police Chief Daryl F. Gates, who was the Chief of the Los Angeles Police Department (LAPD) from 1978 to 1992. He replaced ex-California Highway Patrol officer Jim Walls as the designer of the franchise.

The game is listed as Police Quest 4 (PQ4) in the manual. It is also shown in the file names and the credits, and when exiting the game in DOS, "Thank you for playing Police Quest IV: Open Season". The number does not appear on the title screen.

Police Quest IV differs significantly from the first three games, in both game engine and story. The player plays the character of homicide detective John Carey (portrayed by Sierra actor Brandon Massey), rather than officer Sonny Bonds, and the game is set in Los Angeles, California rather than the fictional Lytton. Backgrounds for the game are digital photographs rather than painted scenery, and depict real locations in Los Angeles. The Parker Center is a location used in the game, and is virtually unchanged from when the game was made. Written text is replaced by audible narration and dialogues on the CD version, released in 1996.

The entire game, like Police Quest III and the 1991 re-make of Police Quest 1, is based on a mouse-controlled user-interface system. Icons for "walking", "speaking, "using" and "looking" are used rather than the old-fashioned text-parsing system used in the first two games.

Homages to Sonny Bonds appear in two places: the name of the police server is "SONNY" and "Sonny Bonds" also appears on the high score screens of the two arcade games in the Short Stop Bar (CD version only).

The game starts in a South Central Los Angeles alley at around 3:00 AM. Carey finds his best friend and ex-partner, Officer Bob Hickman, murdered on the scene, alongside eight-year-old Bobby Washington. The seemingly random string of gang-related murders continues along, providing Carey with clues to find his killer(s).

After five people are murdered, mutilated and found in public places, Carey finally closes in on the killer. He stumbled across the proprietor of a second-rate movie theatre, who has a stuttering problem. The owner offers him some tea and invites him into the theatre to watch a film. Carey passes out and hallucinates that the proprietor is the cross-dresser seen near the body of Hickman. The owner wakes Carey up and throws him out of the theatre. Carey finds the killer's house (led there by his dog), only to find a severed head in a fridge. Carey finds a hidden passage that leads back to the theatre, and finds a woman passed out in the seats. When he returns, he sees the owner dragging the unconscious woman into a back room. Carey is subsequently knocked unconscious. However, Carey manages to scrounge up some hairspray and a lighter, finds the woman covered in blood with the killer looming over her, and torches the killer. Although the woman is limp and covered in blood, we can assume that Carey saved her because the mayor mentions that only five people were killed, as he presents Carey with the Medal of Valor.

Also, for the 1996 release of the game, a two-minute promotional video was included.