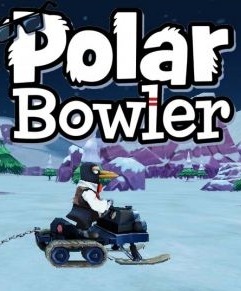 Polar Bowler is a bowling video game created by WildTangent for the Microsoft Windows operating system. It was released in 2004 and distributed by WildTangent in a CD called Polar Games. a few years later it released for the Nintendo DS in 2009 then remastered on PC, Android and iOS in 2014.

It was later re-imagined as Polar Bowler 1st Frame for mobile smartphones and tablets and was released in 2013. Polar Bowler 1st Frame reintroduced the bowler as PB and introduced his valet, J. As a player, you launch PB down a 10 pin bowling lane and knock over as many pins as you can. As you speed down the lane, you can turn as you please. Occasionally, crates will drop in the middle of the bowling lane. You can pick these crates up as you head down the alley. Inside of the crates are boosts (such as Inflate, Snowball Throw, and a Balloon Pop) or multipliers that help you get a higher Polar Score.

The game doesn't solely rely on bowling scoring. There is a scoring system called "Polar Scoring" which scores you based on how many pins you knock over, the velocity at which you do it, hitting the bumpers multiple times, etc. This score is what is tracked in the leaderboards.