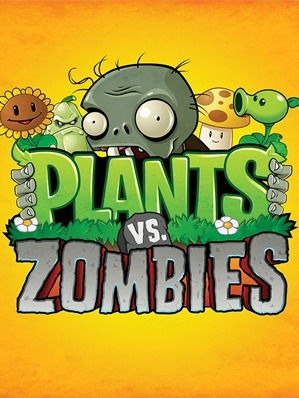 Plants vs. Zombies is a tower defense and strategy video game developed and originally published by PopCap Games for Windows and OS X in May 2009, and ported to consoles, handhelds, and mobile devices, and in remastered versions for personal computers.

In Plants vs. Zombies, players take the role of a homeowner in the midst of a zombie apocalypse. To defend their home from zombies, some which have unique abilities, the player uses plants that can fire projectiles at the advancing zombies or have other effects on the approaching hoard. Players must plan defenses in multiple "lanes" across the home's lawn and should a zombie make it to the house on any lane, the game is over. Director George Fan was inspired to make the game after playing other tower defense titles and desiring to eliminate the typical strategies of sending advancing enemies through mazes of defenses, instead adapting the lane approach to remove this strategy.

In Plants vs. Zombies, players place different types of plants and fungi, each with their own unique offensive or defensive capabilities, around their house, in order to stop a horde of zombies from reaching it. The playing field is divided into 5 to 6 horizontal lanes, each with lawnmowers, and with rare exceptions, a zombie will move towards the player's house along one lane only (the main exception is if it has bitten a garlic, causing it to move to another lane). Planting costs "sun", which can be gathered for free (albeit slowly) during daytime levels and by planting certain plants or fungi. Most plants can attack or defend against zombies in the lane they are planted in only. In later levels, players can purchase upgrades with different offensive and defensive abilities.

The game uses several different level types and layouts. The game starts out in a front yard and progresses to nighttime levels, where the gameplay is more challenging without any replenishing sun unless specific plants are used. Other levels feature the backyard, with a pool added. Later levels are nighttime pool levels (where fog fills the right half of the screen except when specific plants are used), a lightning storm level in pitch black (except when illuminated by occasional flashes of lightning), and rooftop levels. On the final level, the player must face a huge robot operated by a zombie who takes the form of a mad scientist known as Dr. Zomboss. At set points throughout the game, the player is either warned through a letter by zombies or addressed by their neighbour, Crazy Dave, to prepare for an ambush, where the game takes on a bowling style, using Wall-nuts to bowl down zombies, or a modified version of regular levels, where random plant types come upon a conveyor belt, and the player can use the plants without spending sun.

The player starts with a limited number of seed pack types and seed pack slots that they can use during most levels. The number of slots can be increased through purchases with in-game money. At the start of a level, the player is shown the various types of zombies to expect and given the opportunity to select which seed packs to take into the level. Several plants are nocturnal, such as mushrooms, have a lower sunlight cost, and are ideal for nighttime levels. Certain plants are highly effective against specific types of zombies, such as the Magnet-shroom, which can remove metallic items from a zombie, such as helmets, buckets, ladders, and pogo sticks. Plants may be placed on any available square of lawn, on lily pads floating in a pool, or in flowerpots on a rooftop; these last two items may be chosen as a seed pack for their respective level types and deployed to increase the usable planting space.

The zombies also come in a number of types that have different attributes, in particular, speed, damage tolerance, and abilities. Zombies include those wearing makeshift armor, those who can jump or fly over plants, and a dancing zombie able to summon other zombies from the ground. At various points, the player will be inundated with a huge wave of zombies.

If a zombie reaches the end of a lane, a lawnmower will shoot forward and destroy all the zombies in that lane. However, if a zombie reaches the end of that same lane for a second time, it will reach the player's house. When this happens, the music changes and the other plants and zombies stop moving while that zombie enters the house. Crunching sounds will be heard, accompanied by a scream and a message saying "The zombies ate your brains!". The game will then end and display the Game Over dialog box along with an option to retry the level or return to the main menu at the upper-right side of the screen.