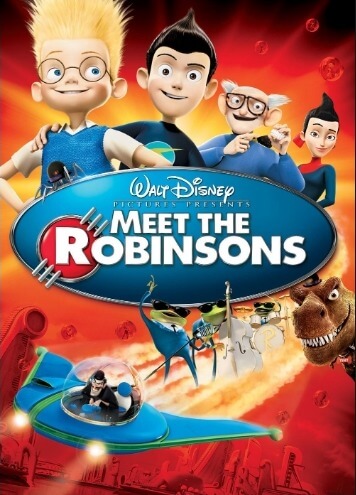 Meet the Robinsons refers to three different video games based on a film by the same name.

The game begins with Wilbur Robinson doing some time-traveling of his own, risking both his safety and the time stream in the process. Despite his father's warning not to mess with the time machine while he's away on a business trip, Wilbur doesn't seem fazed. Soon, the second time machine is stolen by the Bowler Hat Guy and Wilbur ends up following him into the past. It is here where Wilbur accidentally knocks down Stanley and Lizzie, disrupting the time stream in the process.With their projects ruined and their dreams crushed,an alternate future develops.

Carl immediately calls Wilbur back to the future,realizing that their world is now under the dangerous control of Emperor Stanley and Queen Lizzie. It is up to Wilbur to fix the time stream before he can go back to pursue the Bowler Hat Guy, events which lead straight-up to Wilbur's entrance in the movie.

The game follows Wilbur through 40 missions and 6 different locales, a few of which are revisited in the movie. Secret Blueprints allow the player to "build" different Cheats and Extras, using Cornelius Robinson's Transmogrifier. This machine creates items using Base Components which Wilbur collects during his adventure. A Breakout like game called Chargeball is both featured in the game itself and as an extra gameplay option. Different Chargeball "maps" can be found throughout game and it is up to Wilbur to become the Chargeball champion.

Original actors such as Wesley Singerman, Harland Williams, Adam West, Nicole Sullivan, and Stephen Anderson reprise their roles for the Robinson family, while Daniel Hansen (Lewis) doesn't appear in the game at all.

The locations in this game include: Ancient Egypt, the Robinsons' house, the Robinsons' basement, Joyce Williams Elementary School, the alternate future, Magma Industries, and Old Town.

Results of the game were average to mixed.