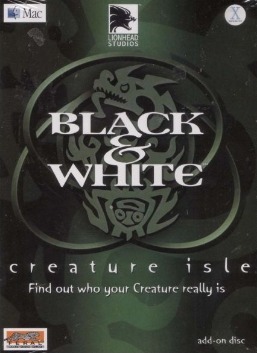 The new creatures are Crocodile, Chicken, and Rhinoceros.

Tyke is given to the player early in the game. Tyke will learn from the player's creature. It will treat it as a father. It will ask for food, attention, and playtime. The player can put Tyke into a daycare, relieving the creature of his fatherly duties. But if it is kept in there for too long, the advisers will complain, and Tyke will get angry. During the trial in which the player raises Tyke, they are encouraged to teach it. The advisers will tell the player when they are ignoring Tyke. Tyke can learn miracles also, which adds more impressiveness. It will also learn and try to mimic what the creature does. It will try to have a similar personality, too. After beating the game, Tyke will turn into an AI around the isle, and whatever creature the player beats the game with will become a new tyke. So if the player beats the game as the chimp, the new Tyke will become a chimp. Players can also have an identical model creature, but different ones. (Ex. Polar bear as a tyke, brown bear as creature) The new Tyke will know all the spells and lesson of the old tyke.

Players should also note that Tyke can suffer neglect. If left in daycare, ignored, or even hurt by your creature, they may become more hateful. Tyke may not turn out how the player wants them to. They may soon ignore you, or possibly defy your creature's teachings.

The story of this game involves the player controlling his or her creature (either a new one or the creature they used in Black & White) and completing missions, which are given to the player by members of a Brotherhood. The members are all creatures that are not controlled by a god, and they all wear bracelets to show their membership in this Brotherhood. Once the player completes a mission, they can then fight the creature that gave them the mission or choose to fight that creature again or use that creature at will. Once the player has successfully completed all the missions and won all the fights, they will be able to see Eve and have a baby pet for their creature. The player's pet will then have a pet, which can help both the creature and the player. Also, there is the speed miracle, though no skirmishes included in the game carry it. It can be used to get past various trials more easily. If the player does not have a creature of certain height, the creature will be enlarged. It will also automatically know the three basic spells (food, water, and wood). The default creature for newly created profiles in Creature Isle is the Ape.

All games from the serie "Black & White"