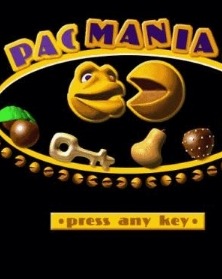 PacMania is a series of computer games developed and published by Alawar Entertainment, based on the Pac-Man series. All games are a try before you buy model, usually a 60 minute trial. To buy the full version of the latest game, PacMania III, you have to pay £4.61 in the UK, or $6.99 in the US, although anyone in the world can buy it.

The first PacMania game was released in 1999. It is a remake of the original Pac-Man, featuring the big-lipped pac player (see Advanced mode in PacMania II below) eating all the dots as usual and avoiding being eaten by three types of monsters: skeletons, "boss" skeletons, and ghosts that traveled through walls.

There were also new types of objects: "slow down enemies" powerups, "double" powerups that added a second Pac-Man on the field, keys that opened special doors, crossbones that destroyed all monsters on the screen, bombs that killed the nearest enemy, and arrows that reversed your controls.

A majority of these changes were preserved in Pacmania II Advanced mode with the exception of keys (in the original, one key had unlimited uses and was always in a specific spot, while in PacMania II Advanced mode keys disappeared after using them once and appeared randomly like other powerups)

Additionally, the original had unique sounds for all powerups, but PacMania II added a generic "pick up powerup" sound for all eight of them.

PacMania 2D+ was released on August 5, 2000. This time the field is an isometric projection so the player is able to observe it at a particular angle. There is also an opportunity to customize various parameters such as game velocity. It had 20 levels.

PacMania 3D is a three-dimensional version, released in early 2001. A special feature in this game is the ability to jump to a different maze, as all the mazes are in 3D. Later updates until 2003 included two new skins, Advanced and Carmania modes observed from PacMania II (see below).

PacMania II, was released on March 9, 2002. It featured a second mode called Advanced, which features a different 'Pac-Man' with big lips, and the enemies are skeletons. Objects include bombs and hearts. In 2003, version 2 was released which featured yet a third mode, called Carmania. This one features a bulldozer as the pac player, and your enemies are little cars. Objects include fuel tanks, screwdrivers and hearts.

PacMania Gold was released on September 15, 2004. This game is set in the Wild West, where Pac-Man has to recover stolen treasures but has to survive being eaten by the bandits and the Indians.

PacMania III was released in July 7, 2005. In a 2006 updated version, it has included a fourth mode, Aquamania, where there is a boat as the pac player (on water) and your enemies are sharks. Objects include whales and the lifeguard rings. It has 60 levels, but this extends to 120 levels in the full version. In 2006, the game (Classic mode only) became an online game on the internet, still playable. The game received critical updates until July 2007.