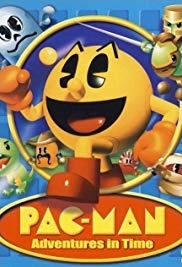 Pac-Man: Adventures in Time is a Pac-Man game for the PC, developed by Mind's Eye Productions and Creative Asylum and Published by Hasbro Interactive in 2000. The game features five worlds (or time-periods), over forty 3D mazes (or levels), and Internet play.

As in the original Pac-Man arcade game, the basic objective of each level is to guide Pac-Man through a maze while eating dots, unique food items, and power pellets that make Pac-Man's enemies, the Ghosts, edible for a limited time. The ability to jump returns from Pac-Mania for bypassing hazards and avoiding enemies. Some levels contain obstacles such as deadly boulders, animals who delay or kill Pac-Man, and explosive projectiles. After every few rounds there is a bonus mini-game in which the player can obtain some extra points (with every 50,000 points earning Pac-Man an extra life). The levels also feature a variety of shapes and architectural features such as cylindrical mazes, canopies, bridges, pyramids, and even walls that allow Pac-Man to walk vertically. The game features more sophisticated events than its arcade predecessor, such as collecting a certain number of pellets to unlock another area of a maze. The game also includes the ability to see the short intermission videos that come before a new level and allow for an option of non-storyline play on specific levels. The game also has the ability to connect over the Internet for multiplayer mini-games.

In the introductory scene, under orders from the villainous Mollusc, Ghosts Inky and Clyde steal a magical power pellet known as the Artifact that has kept Pac-Land free from evil. The Mollusc smashes the Artifact and in a mighty explosion of power, its four fragmented pieces are scattered across time and space. The player's challenge as Pac-Man is to retrieve the Artifact's four pieces from the now ghost-infested time periods and return them to the present. Professor Pac-Man prepares an unpredictable, hastily constructed Time Machine to help Pac-Man on his quest.

Pac-Man initially travels through four different time-periods, including prehistoric times, Ancient Egypt, the Middle Ages, and the Wild West. Although the Time Machine sometimes malfunctions, sending Pac-Man to an unexpected place and time, he is eventually able to obtain in each era one of the four pieces of the Artifact. Afterwards, the Time Machine malfunctions again before Pac-Man can return to the present, instead bringing him to a fifth time-period: the future. Professor Pac-Man claims that an alternate power source is needed to bring him home from the future. In this fifth time-period, Pac-Man finally comes to the Reactor Core and is able to harness its energy to be finally transported, with the Artifact reassembled, to the second after the Mollusc broke the Artifact in the game's introduction scene. Aiming the now-repaired Artifact at the Mollusc, Pac-Man fires a beam of light at his foe, vaporizing the Mollusc and grinning triumphantly.

These are the following time periods that Pac-Man goes to:

Ancient Egypt - This era features the Ghosts as Thieves, Merchants, Jackals, Egyptian Guards, High Priests and Egyptian Gods. Some levels have cobras that will strike Pac-Man.

Middle Ages - This era features the Ghosts as Peasants, Living Mushrooms, Knights, Dragonoids, Jesters, and Skeletons. One level has a sleeping dragon that will attack once it wakes up.

Wild West - This era features the Ghosts as Outlaws, Conductors, and Miners. Some levels have rattlesnakes that will strike Pac-Man when they are awake.

Future - This era features the Ghosts as Robots, Scientists and Aliens.

Pac-Man: Adventures In Time received mostly positive reviews. GameSpot praised the game, saying "The occasionally sluggish control can be a little frustrating, but not enough to take the fun out of the game,". The game currently holds a ranking of 79 out of 100 on Metacritic.