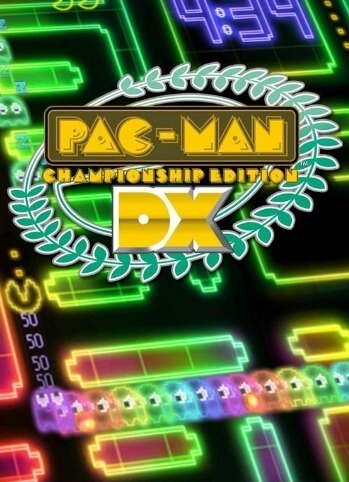 Pac-Man Championship Edition DX is a 2010 maze video game developed and released by Namco Bandai Games for the Xbox 360 and PlayStation 3, later ported to Steam and iOS. It is the sequel to the 2007 game Pac-Man Championship Edition, which was the last game developed by series creator Toru Iwatani. The player controls Pac-Man as he must eat all of the dots in the maze while avoiding colored ghosts that pursue him. A bonus item will appear once the player has eaten all dots on one side of the maze, causing the layout to change. Several additions were made over the original, such as bombs that send all ghosts to the regeneration box and sleeping ghosts that will give chase should Pac-Man move past them.

Development of the game was assisted by Chinese developer Mine Loader Software. The development team wanted the game to focus on the excitement of fleeing from ghosts, and to appeal towards a more casual audience. Early prototypes experimented with increasing the number of power pellets and ghosts, leading to the sleeping ghost and "ghost train" mechanics being added. The neon art-style was inspired by the fluorescent lights used in early LCD handheld games, made to help it stand out among other games. It was the first game released under the Namco Generations label, used for remakes of older Namco video games.

Pac-Man Championship Edition DX builds upon the gameplay of Pac-Man Championship Edition, in which players control Pac-Man as he travels through a maze collecting dots and avoiding ghosts, which can be eaten by collecting power pellets. Collecting all the dots on one side of the maze makes a fruit appear on the other side, which adds a new layout of dots on that side and so on. The game's speed increases as the player gets more points and drops when the player loses a life. DX introduces a new type of ghost that sleeps in a stationary spot on the maze until Pac-Man moves past it and begins to follow him. By passing several sleeping ghosts, they form a large rainbow-colored trail that can offer massive bonus points once Pac-Man is able to get a power pellet and eat them. Some ghosts may also have additional power pellets that can prolong the powered-up state if eaten in time. Getting close enough to the regular ghosts turns them rainbow-colored and they may also be added to the trail. A slow-motion effect automatically kicks in whenever a ghost gets too close to Pac-Man, which offers players the chance to make a last-minute attempt to avoid being killed. Players can also use a limited supply of bombs that return all the ghosts to the center of the maze, although it lowers the dot multiplier and game speed.

Gameplay revolves around three main modes: Score Attack, in which players attempt to get the highest score within 5 or 10 minutes; Time Attack, consisting of several short trials and one long one in which players must obtain a certain amount of fruit as quickly as possible; and Ghost Combo, where players must try to stay powered up and eat as many ghosts as possible. The game features nine courses, which includes the original maze from Championship Edition, in which the sleeping ghosts are absent. Players receive a ranking for each game mode per course, which is based on his/her position on the overall leaderboards. The game has various visual styles, including some in the style of Pac-Mania, which can be mixed and matched. Players may also access a constantly updated NG News feature, which includes articles such as developer interviews, as well as view video replays of the highest-ranking Score Attack players via the leaderboard.

The game has received universal praise from critics and gaming Web sites, and is cited as a big improvement over the original. IGN gave the game a perfect 10/10 and an Editor's Choice award, calling it "a master class in game design." GameSpot gave the game 9.0/10, praising the new elements which make Championship Edition "more thrilling and addictive than ever." 1UP.com gave the game an A rank, calling it "insanely addicting." Eurogamer gave the game 10/10, calling it "a game you'll want to instantly evangelise to anyone with even the vaguest sense of what makes a game good." Destructoid gave the game 9/10, calling it "one of this year's best and purest arcade experiences and definitely a must-buy." Giant Bomb gave it a score of 5/5, saying that the player experiences "sensory overload of the highest order, the kind of game that leaves your eyeballs dry, your nerves shot, and every last bit of you wanting more." Good Game gave it 9.5 out of 10.