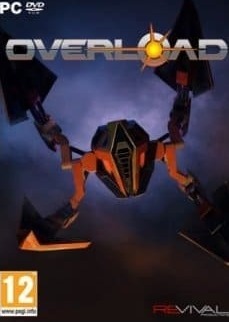 Overload is a 3D first-person shooter video game developed and released by Revival Productions for Windows, macOS and Linux on May 31, 2018. A version for PlayStation 4 was released October 16, 2018. It features six degrees of freedom movement in a 3D environment with zero gravity, allowing the player to move and rotate in any direction. The game is set primarily on the moons of Saturn, where facilities have sent out distress signals about the mining robots turning hostile.

The game, which has been described as a 'spiritual successor' to the video games Descent and Descent II, received generally favorable reviews on release.

The gameplay of the game is similar to the Descent series. The player is tasked with controlling a gunship in zero gravity inside a variety of mining facilities and cave areas, fighting hostile worker robots (called autonomous operators in the game) and finding possible survivors in cryostasis tubes. Every level has an objective to complete, with most levels carrying over the traditional goal of destroying the reactor powering the facility and escaping before the reactor meltdown destroys the entire facility. Levels may also feature alternative objectives, such as destroying every hostile robot in a level, destroying a boss or simply finding and reaching the exit.

The game in its core is a first-person shooter with a fully three-dimensional environment, but with six degrees of freedom movement in zero gravity, allowing the player to move and rotate in any direction, which demands spatial awareness skills from the players. The enemy robots share a similar movement model. To assist in navigating around the level, the player can call up a Holo-Guide, a holographic bot that can lead the player to a destination (similar to the Guide-Bot of Descent II), and a fully three-dimensionally rendered automap, based on a similar feature seen in Descent, showing the areas of the level that the player has already discovered or spotted. In order to progress in most levels, the player is required to collect access keys to open doors to access further areas. The levels also contain a variety of secret areas behind camouflaged doors, some of which may be locked and require a puzzle to be solved in order to unlock them.

Overload also features an upgrade system. Upgrade points are scattered around the levels, mostly behind secret areas, and are also given for completing certain tasks, such as finding all of the survivor cryostasis tubes. The player can upgrade the gunship with these points between levels, with upgrades available for both the weapons and the ship itself.

If the player racks up too much damage and depletes the gunship's armor, the ship is destroyed. The player is then required to load from an earlier save (single-player campaign only) or to restart the level.

There are two single-player modes in the game. The first is the Cronus Frontier campaign featuring 16 levels and three bosses, while the second is Challenge Mode, a survival mode taking place in twelve different levels. The Challenge Mode features two modes of its own, Infinite and Countdown, and its levels are smaller than those of the campaign. The campaign story features full voice acting in English, with subtitles available in the other languages supported by the game. Once the campaign has been completed, it can be played again with increased difficulty and the upgrades the player collected from the first playthrough. Challenge Mode also features an online leaderboard, where scores of the players can be categorized by level, difficulty and mode.

Keyboard, mouse, gamepad and joystick controls are among those supported. The game also supports virtual reality with both the HTC Vive and the Oculus Rift.

Overload features online multiplayer with three modes: Head to Head, Anarchy and Team Anarchy. The game, which uses a client–server model, can be played on online servers, featuring both public and private matches, or over a LAN. Cross-platform multiplayer is supported between the supported computer platforms, and in addition, PC players will be able to play with PlayStation 4 and Xbox One players, but players of these consoles will not be able to play with each other.

The game supports user-created levels, which can be created with an official level editor.

The game begins in 2118 with a multi-purpose service vessel (MPSV) approaching Ymir, one of the moons of Saturn. The vessel, called MPSV Iberia, is registered to Cronus Frontier, a colony located on the moons of Saturn that was established eleven years prior by a corporation working in the space industry called Juno Offworld Automation, a subsidiary of which Cronus Frontier still is. The unnamed protagonist awakes from cryostasis with neurological damage and amnesia, and is instructed by Mara, a self-described synthetic intelligence construct, telling that the vessel, now in the orbit of Ymir, has arrived to help those in a mining facility on the moon after receiving a distress signal from there. The distress signal stated that the autonomous operators used for mining and security purposes have malfunctioned, turned hostile and attacked the human employees currently working inside the facility.

The protagonist is supplied with a Kodachi light gunship and given the task of clearing out the facility and locating any survivors. The game then progresses to facilities located on other moons, which too have malfunctioning autonomous operators, as the mysteries surrounding the cause of the malfunction and the exact nature of the relationship between Juno Offworld Automation and Cronus Frontier begin to unravel.