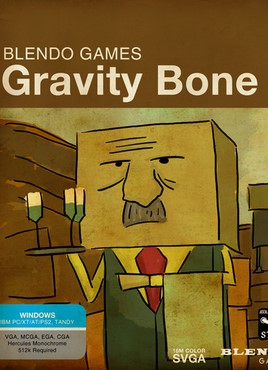 
Gravity Bone is a freeware first-person adventure video game developed by Blendo Games, and released on August 28, 2008. The game employs a modified version of id Software's id Tech 2 engine—originally used for Quake 2—and incorporates music from films by director Wong Kar-wai, which were originally performed by Xavier Cugat. Four incarnations of the game were produced during its one-year development; the first featured more common first-person shooter elements than the released version. Subsequent versions shifted in a new direction, with the inclusion of more spy-oriented gameplay.

Gravity Bone received critical acclaim from video game journalists. It was called "a pleasure to experience" by Charles Onyett from IGN, and received comparisons to games such as Team Fortress 2 and Portal. The game was praised for its cohesive story, atmosphere and its ability to catch the player's interest over a very short time span without feeling rushed or incomplete. It received the "Best Arthouse Game" award in Game Tunnel's Special Awards of 2008. A sequel, Thirty Flights of Loving, was released in 2012.

Gravity Bone is a first-person adventure video game that lasts around 20 minutes, and is set in the fictional city of Nuevos Aires. The player controls an unnamed spy, and is tasked with accomplishing several missions across the game's two stages. At the end of the game, the player-controlled spy is killed by an unknown woman after chasing her through the last half of the second level. The game was designed to leave the player without a clear idea of how the game's story evolves.

During these missions, objectives and guidance are provided through the player's interactions with objects and environments in the game. The tutorial system used to demonstrate routine gameplay elements such as object interaction and movement is disguised as the first level of Gravity Bone. Here, the player is tasked with the delivery of a contaminated drink to an unspecified non-player character. After the first level is completed, the player is sent to the second level of the game, which follows the pattern of the first; the player is assigned a set of actions and goals involving platforming sequences.

Gravity Bone was developed by Brendon Chung under his video game studio Blendo Games. Chung, who worked as a level designer for Pandemic Studios, has contributed to the development of titles such as Full Spectrum Warrior and Lord of the Rings: Conquest. Four incarnations of Gravity Bone were produced during its one-year development. Chung commented during an interview with FidGit that "Gravity Bone started out very different from what it was and ended up getting scrapped ... so on and so forth until this version came out." The first version of Gravity Bone featured more typical first-person shooter elements than the released version, and was based on a series of Quake 2 maps entitled Citizen Abel. He elaborated that the first version of the game had the player running around with a gun, "shooting things and stuff explodes." Development shifted in a new direction, and Gravity Bone was transformed; the player would act as a computer hacker, "hacking stuff all the time."

Most of the original first-person shooter elements were removed by the third revision of the game, which incorporated a more spy-oriented style of gameplay, with the player "trying to quietly take out enemies and not be seen." Chung commented that he reworked the game several more times to fit his vision: "It kept on just changing and changing and changing until it got into a more story-oriented direction." He stated that he did not feel comfortable developing Gravity Bone as a first-person shooter game, and kept adding "bits and bits of more and more unconventional" elements as a result. He explained that he "got stuck on this idea of the hero never fires a gun, but he just has a bunch of tools on his belt, like a power drill or a can of pressurized Freon, a screwdriver. I thought that was kind of funny and interesting."