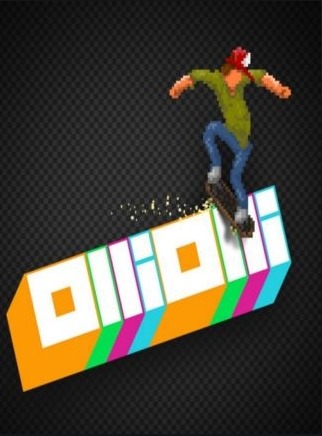 OlliOlli is a side-scrolling skateboarding video game developed and published by Roll7. It was released for PlayStation Vita on 21 January 2014 in North America, and on 22 January 2014 in Europe.

On 9 April 2016, it was announced that Roll7 cooperated with Spanish publisher and distributor Badland Games to bring OlliOlli and OlliOlli2: Welcome to Olliwood to retail stores, delivered as OlliOlli: Epic Combo Edition for PlayStation 4.

OlliOlli features two-dimensional levels and a very basic control scheme, using only the "X" button, shoulder buttons, and left analog stick. The player combines tricks performed with attempting to land perfectly, and failing to do so results in the game awarding only a fraction of the points that would have been earned with a perfect landing. Each level has 5 achievements to perform, and once complete unlocks a harder level. Falling at any point in a level forces the player to reattempt the level.

OlliOlli was developed by Roll7 and was originally intended to be released for iOS devices. In an interview with Gamasutra, Roll7 founder John Ribbins cites a conversation with James Marsden, creator of Velocity as the reason he took the game to Sony. After pitching the game to Shahid Ahmad, Senior Business Development Manager for Sony Computer Entertainment Europe (SCEE), Ribbins decided to drop iOS and develop OlliOlli exclusively for the PlayStation Vita. The use of physical controls over touch-screen controls allowed Roll7 to add additional mechanics to the gameplay, including the perfect landing system and the unlockable "RAD" mode. The game was delayed from its planned December 2013 release into 2014 due to an issue with the "Daily Grind" system.