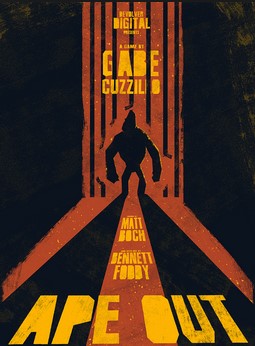 
Ape Out is a beat 'em up game developed by Gabe Cuzzillo and published by Devolver Digital. The game was released for Microsoft Windows and Nintendo Switch on February 28, 2019.

Ape Out is a beat 'em up game played from a top-down perspective. The player controls a gorilla running through a maze killing the ape's "captors", gun-toting humans. The humans are easily killed with a single attack, but armed with guns they can quickly kill the player as well.

Ape Out was developed by Gabe Cuzzillo using the Unity game engine. Ape Out was Cuzzillo's second game, after Foiled, which he developed with Aaron Taecker-Wyss and released in 2014. Development on Ape Out began when Cuzzillo entered into game development courses at New York University (NYU), where he also worked on an independent study with Bennett Foddy. Foddy contributed to Ape Out's art, while Matt Boch, an associate professor for NYU's Game Center, worked on the game's music system and sound design. Ape Out was part of the NYU Game Center Incubator and partially financed by Indie Fund. In 2016, Ape Out was a finalist for the Independent Games Festival's "Best Student Game" award, losing it to Beglitched.

Publisher Devolver Digital announced their involvement in Ape Out in March 2017, when they released a playable trailer for the game and announced a projected release date of "summer 2017". The publisher announced in December 2017 that Ape Out would be released on February 7, 2019, for Microsoft Windows and Nintendo Switch. However, the game was delayed by three weeks and was released for both platforms on February 28, 2019.

(0) Comments on "Ape Out Full Version"