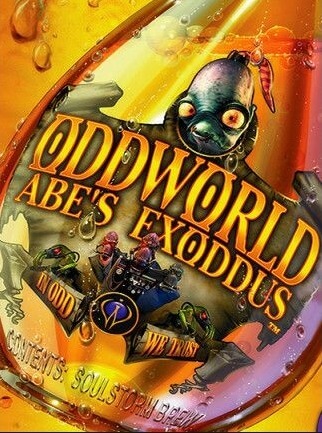 Oddworld: Abe's Exoddus is a platform video game developed by Oddworld Inhabitants and published by GT Interactive. Although the game is a sequel to the video game Oddworld: Abe's Oddysee, it is considered a spin-off title in the Oddworld series, and not part of the main Oddworld Quintology. It was released in November 1998 for the PlayStation video game console and Microsoft Windows. It was re-released on the PlayStation Network in October 2009.

The game continues the story of Abe, charting his efforts to save his fellow Mudokons from another plot by the Glukkons to exploit them. Abe discovers that the Glukkons are enslaving Mudokons, this time to produce a drink called Soulstorm Brew, which uses Mudokon bones and tears as its ingredients. The player assumes the role of Abe, embarking on a quest to halt production of SoulStorm Brew.

The game was released to similar critical acclaim as the first title. Reviews praised the game's ability to allow the player to quick save anywhere they liked, a feature that was not present in Abe's Oddysee, while noting that it was very similar to that title. The game won multiple awards upon release.

On March 14, 2016, it was announced that Oddworld Inhabitants are working on a follow-up to Oddworld: New 'n' Tasty! (a 2014 Abe's Oddysee remake) titled Oddworld: Soulstorm. The game page confirms that this title is inspired by Abe's Exoddus and that the new game is going to be a re-imagining of Abe's Exoddus.

Abe's Exoddus is a two-dimensional platform game, with many of its elements taken from the previous title, Abe's Oddysee. The game is split into screens; when the player moves into the edge of the screen, the environment is replaced, just like in the previous title. Most screens include various puzzles that must be solved through the use of Abe's unique abilities: "GameSpeak", possession, controlling mine cars, activation or deactivation of mines or levers, and rocks, grenades, or bones that can be picked up and used for different purposes. Normal abilities include creeping, walking, running, rolling, hoisting, jumping, and crouching, all of which have specific application and make up a necessary arsenal of moves.

The game features no user interface or heads-up display. Information is conveyed to the player through instructive screens that can be activated by the player character, or through scrolling messages in the background. Characters do not have hit points; instead, being attacked (such as being shot or mauled) generally causes instant death. However, the player has unlimited lives, and upon death will re-spawn at the last checkpoint they reached. Abe's Exoddus includes an option to quick save which allows the player to designate their own checkpoints, a feature which was not present in Abe's Oddysee due to programming conflicts and which attracted criticism of that title.

While the focus of the gameplay is surmounting screens, there is a secondary focus on rescuing enslaved Mudokons. GameSpeak is a pivotal ability in this respect; by pressing combinations of buttons, the player character will utter short phrases that can be used to control allied non-player characters—to pull extra levers, to follow the player character,or simply to wait.

Unlike the first game, Mudokons have emotional states and status ailments that affect how they respond to Abe. Mudokons may be angry, wired, depressed, sick, or blind, and each state must be dealt with differently by the player. Angry, wired or depressed characters can be consoled through specific GameSpeak commands. An "angry" Mudokon (red) will either repeatedly slap nearby Mudokons or work dangerous traps and can be told to "stop it" though Abe must tell them he is "sorry" to calm them down. If a "depressed" Mudokon (blue) witnesses too many deaths of other Mudokons or if he is slapped, he will start to hit himself in the head and eventually commit suicide. Abe again can prevent this by saying "stop it" and remove the ailment by telling them he's "sorry". Both angry and depressed Mudokons will not follow Abe if he tells them to. Clouds of laughing gas will turn Mudokons "wired" (lime), causing them to hyperactively run in Abe's direction and in some cases make it harder to get past enemies and obstacles. They will only calm down when slapped but the slap will have no effect if done within the gas cloud. "Sick" Mudokons will not respond to any GameSpeak command whatsoever (aside from being slapped) and can only be cured with a special chant, obtained when Abe finds a helper character. Blind Mudokons (distinguished by pale skin and with their eyes sewn shut) will keep walking in the direction of Abe's voice, and must be told to "wait" before they walk into a hazard.

Possession is the player character's ability to take control of certain characters in the same screen by chanting. When a character is possessed, the player can use their abilities and weapons to find otherwise unreachable areas or levers, kill enemies, or as part of solving puzzles. However, when possessing a character, the player character remains immobile and vulnerable to attack. Possessing a slig in particular sometimes has to use voice commands to solve puzzles. This is done with an "Ackack!" which the game refers to as 'BS' "Ay!" which is referred to in the game as 'S'BS' and a laugh. The whistling passwords have been removed from the previous game.

The player can abandon possession of a creature at any time. Scrabs or Paramites will be released without harm when abandoned, while Industrialists (Sligs and Glukkons) will burst into pieces. If the player character has drunk Soulstorm Brew, they will be able to possess their own fart, which can then be used as a flying explosive and will detonate either when control is abandoned, or after a period of time.

Slave Mudokons (including blind ones) are rescued through Bird Portals. If the player character chants when in the same screen as a Bird Portal, the portal will activate, and any nearby Mudokon slaves will run through it, disappearing. Rescuing Mudokons is not usually crucial to progressing through the game; however, rescuing at least 150 is necessary to get the good ending, and many secret areas revolve around rescuing a few Mudokons in particularly complex situations. There is an alternative ending known as the 'Maximum Casualties' ending. If the player kills all 278 Mudokons, the player is awarded with invincibility.

Allies in the game include Mudokons, humanoid species encountered as rescuable slaves and helpers. Normally, they will follow any GameSpeak-given order, but as described above, some Mudokons will be emotional and must be consoled by the player character first. The player character can also possess other creatures, in order to gain help with a task. For example, when possessing a Paramite, the player character can use GameSpeak to communicate with other Paramites, in much the same way as Mudokons. Scrabs also have minor abilities of GameSpeak, but are limited to shrilling, which activates the ability to attack.