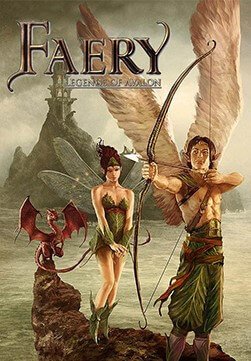 
Faery: Legends of Avalon is a role-playing video game, released on the Xbox Live Arcade service on November 10, 2010, and on the PlayStation Network on January 11, 2011. It was developed by Spiders Studio and published by Focus Home Interactive.

In the game, the player assumes control over a winged faery who has just emerged from stasis. The faery king Oberon informs the player that because humans have stopped believing in faeries, the power of magic has failed and the faery civilization and its inhabitants are slowly being destroyed. The player's objective is to assemble a party of magical creatures and attempt to save several mythical worlds from destruction. The mythical worlds that serve as the game's setting are drawn from preexisting mythologies, and include the ghost ship Flying Dutchman, the great tree Yggdrasil, and the City of Mirage, which is built on the back of a giant beetle.

Faery: Legends of Avalon received mixed to poor reviews upon its release, with a Metacritic score of 57. Critics praised the game's vivid visuals, which employ cel-shading, the bright and upbeat music, and the creative depictions of several well known mythical worlds. However, they also point out that the quests are tedious and repetitive, that the dialogue is bare bones and contains numerous spelling errors, and that the combat is excessively easy. Kevin VanOrd of GameSpot.com summarizes the game as "disappointingly threadbare," and states that "Legends of Avalon amounts to a bunch of bland missions separated by elementary turn-based battles that inspire only a few faint yawns."