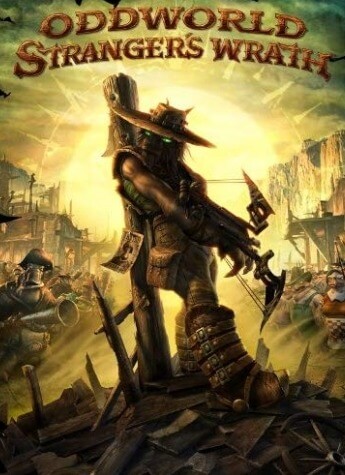 Oddworld: Stranger's Wrath is an action-adventure video game developed by Oddworld Inhabitants and published by Electronic Arts for the Microsoft Xbox. Music for the game was written by composer Michael Bross. It was released on January 25, 2005.

The game details the adventures of Stranger, a fearsome bounty hunter. Throughout the game, Stranger pursues and captures outlaws in order to collect bounties. The goal is to ultimately earn enough moolah (in-game money) to pay for a mysterious life-saving operation. One of the most notable features is the "live ammunition" system, which is ammunition made of living creatures like fictional insects and small mammals, each with different uses and effects against enemies.

The game is re-released as part of the Oddboxx, a collection which includes all the Oddworld games released. It was scheduled to be released in the first quarter of 2010 on Windows through Steam, but became available on December 20, 2010. Development team Just Add Water developed an updated version of the game for release on the PlayStation 3 which was released on the PlayStation Network on December 21, 2011 in Europe and December 27, 2011 in North America. A mobile build was released in 2014 for Android and iOS. An Ouya build was released on January 27, 2015. A build for the Wii U was announced in June 2013, but as of August 2015 the build was placed on-hold.

The premise of Oddworld: Stranger's Wrath is that the player's character, called the Stranger, must capture wanted outlaws, dead or alive. The game utilizes both third and first-person perspectives. In third-person, the player controls Stranger when travelling long distances, platform jumping, rope climbing, and melee combat; and in first-person, ranged weapons are used. Enemies can be approached face-to-face, or by hiding out of enemy sight (as indicated on-screen) and luring foes from or toward the player. Once enemies are encountered, they can be killed or stunned; live captives earn the greater reward.

Upon an attempted capture, Stranger is unable to perform other actions and thus is vulnerable. The player has two status bars: health and stamina. When damage is taken, the health bar drops; if it fully depletes, it will result in the death of Stranger. Stamina drops when the player performs actions like melee attacks or falls from a great height. While it refills itself over time, it can be used to shake off health-bar damage; thus healing the player, but draining the stamina quicker.

One of the game's main features is Stranger's crossbow, used in a first-person perspective, that uses live ammunition in the form of small fictional creatures as projectiles for differing effects. Live ammunition can be bought from the game's vendors or found throughout the game world. When acquired, two different kinds can be assigned to the crossbow at any given time: Stunkz to stun large groups of enemies, Thudslugs as cannonballs, Boombats as rockets, and Bees as small shots.

The game incorporates many role-playing elements in the form of rewards spent on crossbow, ammunition, storage, and armour upgrades and other items such as binoculars and knuckle dusters.

The game begins with a bounty hunter, known only as the Stranger, catching various Outlaws to raise money for a mysterious operation. He travels through three towns inhabited by the bird-like Clakkerz; Gizzard Gulch, Buzzarton, and finally New Yolk City. Midway through, he hears that a tribe of amphibian creatures called Grubbs are tormented by a demon. Their tribe was formerly protected by a race of centaur-like creatures called the Steef, but these are extinct.

When Stranger is about to leave Buzzarton, he discovers that the river near the town has been dried up by a dam, built by a person called Sekto; and it is revealed that Sekto is responsible for the extinction of the Steef, and has offered a bounty for the last survivors. Sekto believes that the Stranger knows where the Steef are hiding, and hires an outlaw named D. Caste Raider to interrogate him. During the interrogation, Raider discovers that the Stranger is a Steef. After this revelation, the Stranger escapes to the Grubbs' village.

When the Stranger meets the Grubb leader, he discovers that Sekto is the demon that stole the water from the Grubbs (thus depriving them of fish, their main food source), and sent Wolvark soldiers to guard the river and destroy any Grubb settlements they find. The Stranger then confronts Sekto. When Sekto is defeated, the dam is destroyed, freeing the water. As Stranger inspects Sekto's body, Sekto is revealed to be an octopus-like creature called an Octigi, who parasitically controlled the tribe's previous Steef. Sekto is then seen swimming away in the newly freed Mongo River.

Upon release, Stranger's Wrath received highly positive reviews with an average critic score of 87% at GameRankings and 88 out of 100 at Metacritic. It later was nominated for and won numerous awards for multiple media outlets. It was nominated for Outstanding Achievement in Animation at the Academy of Interactive Arts & Sciences' Interactive Achievement Awards, Best Artistic Graphics at GameSpot and Best Cinematics and Best Character (Stranger) at G4, while it was a runner-up for Most Innovative Design on Xbox at IGN, won Best Xbox Exclusive Game from Play magazine, was listed in Game Informer's Top 50 Games of 2005 and Stranger was included in their Top 10 Heroes of 2005. Game Informer's Andrew Reiner gave Stranger's Wrath a 9/10, calling it "A stunning and exquisitely realized masterpiece that delivers a gaming experience unlike any that we've seen before....and is truly visionary in its delivery of gameplay."