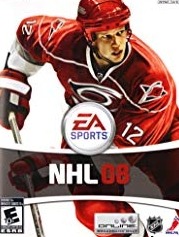 NHL 08 is a video game released on September 11, 2007 in North America; the Xbox 360 version was supposed to be released on the same date as the Microsoft Windows, PlayStation 2 and PlayStation 3 versions, but was cancelled for a day due to shipping issues.

NHL 08 features a new and improved "Skill Stick System," which EA says will allow gamers to more easily control the puck. NHL 08 also includes "Goalie Mode," where users can control their team's goalie with a new third-person camera. Another new feature is the ability to create custom plays, where you can take part in creating custom plays in practice mode.

'Dynasty Mode' allows users to create a dream team and play through to the Stanley Cup, however, there is no fantasy draft on the current generation version of the game (Xbox 360, PlayStation 3), only on the PC and PlayStation 2 versions.

The game features the-then 29 teams of the American Hockey League (AHL). Players can develop talent through the AHL, and then call up their prospects to play in the NHL. Every AHL team is fully playable. Sweden's Elitserien and Finland's SM-liiga are also included on the Xbox 360 and PlayStation. However, the Deutsche Eishockey Liga (DEL) and Slovak Extraliga are only to be found on the PC and PlayStation 2 versions.

Games for Windows: The Official Magazine gave it a score of five out of ten. The game won GameSpot's "Best Sports Game of 2007" award.