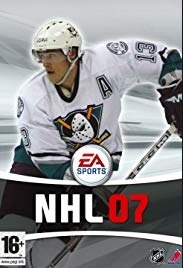 NHL 07 is an ice hockey video game, which was released in 2006. The game improved the series' gameplay with more realistic features, such as stickhandling and a wider variety of controller schemes. As NHL 07 was released on the Xbox 360, this is the first game in the NHL series to be released on a seventh generation console.

NHL 07 features 4 European leagues - Germany's Deutsche Eishockey Liga, Sweden's Elitserien, Finland's SM-liiga, and the Czech Republic's Tipsport Extraliga. NHL 07 for the Xbox 360 features analog stick control and a brand new physics system which eliminates the magnetic type possession of the puck which had been used in past NHL games. Commentary is provided by Gary Thorne and Bill Clement for the Xbox 360 version of the game, however, Jim Hughson and Craig Simpson return for the current generation and PSP versions.

Metacritic gave NHL 07 a 79% rating, stating that "Stellar graphics and a great new stick/shooting system are the hallmarks of this title". NHL 07 received an 8.7 out of 10 from IGN, praising the new still stick and improved puck physics system.