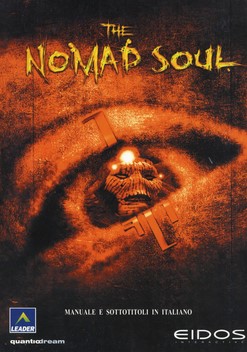 The Nomad Soul (known as Omikron: The Nomad Soul in North America) is an adventure game developed by Quantic Dream and published by Eidos Interactive. It was released for Microsoft Windows in 1999 and Dreamcast in 2000. The player can engage in unarmed and armed combat, explore the three-dimensional environment of Omikron City, and talk with non-player characters to progress the story. It follows an investigation into a case of serial killings, which unravels the supernatural truth behind the city's ancient history.

Director David Cage began writing the script in 1994 and signed a publishing deal with Eidos in 1997. David Bowie made the music with Reeves Gabrels, producing ten original songs. The game was finished after two-and-a-half years. Reviewers praised the graphics, soundtrack, story, character models, reincarnation mechanic, voice acting, and combat, but criticised the controls, loading times, and multiple gameplay styles. It was nominated for various awards and sold over 600,000 copies, with low sales in North America. A sequel was planned but cancelled.

The Nomad Soul is an adventure game played from third-person and side-on perspectives in unarmed combat, and first-person view in armed fighting. The player may explore the three-dimensional environment of Omikron by walking, running, using vehicles known as Sliders, or taking elevators to reach apartments and offices. Combat, speed, dodging, and resistance to damage improve with practice. The fighting controls allow the player to strafe, jump, crouch, punch, and kick. Special moves can be performed through certain combinations. To cross bodies of water, swimming sequences can be triggered, which expends oxygen. Physical exertion depletes energy, which is repleted with Medikits, food, drinks, or special potions. In the event of death (and eventually at will), the player is reincarnated into the body of the first non-player character (NPC) that interacts with them; there are more than forty people to inhabit. Mana levels signify the ability to cast spells and are increased with potions.

Reading messages, talking to NPCs, and collecting items is crucial for the player to progress. They are provided with a computer terminal known as SNEAK, which is mostly used to access character information, call Sliders, open the inventory, and retrieve facts that are vital to story progression. Objects can be used, examined, and stored in the inventory. Magic rings allow the player to save the game at special points and buy advice for key information about NPCs to advance the story. Seteks, Omikronian currency, can be spent on things like consumables, better weapons, and advice. If the SNEAK inventory is full, items can be transferred or deposited into the Multiplan Virtual Locker, a larger inventory.

The Nomad Soul is set in a futuristic city known as Omikron, which is a densely populated metropolis on the world of Phaenon. Omikron exists beneath an enormous crystal dome, which was constructed to protect against the ice age that Phaenon entered into after its sun's extinction. The city is split into different sectors: Anekbah, Qalisar, Jaunpur, Jahangir, and Lahoreh. Because it is forbidden for the inhabitants to leave their respective sectors, each area has developed independently, which is reflected by the divergent lifestyles and architecture.

At the start of the game, the player is asked by an Omikronian police officer named Kay'l 669 to leave their dimension and enter Omikron within his body. After doing so, the player continues with the investigation of serial killings that Kay'l and his partner were originally working on. The player begins the investigation in the Anekbah sector, where they uncover information that suggests the serial killer they are looking for is not human, but actually a demon. Members of an apparent underground, anti-government movement contact the player and confirm their suspicions. The investigation deepens and uncovers further information; one of Omikron's chief police commanders, Commandant Gandhar, is a demon pretending to be human and luring human souls into Omikron from other dimensions by way of The Nomad Soul. Kay'l 669 asking the player to help him turned out to be a trap: supposedly, if the in-game character dies, the real human playing the video game will lose their soul forever. Despite many assassination attempts on the protagonist's life by other demons working behind the scenes, the player destroys Gandhar with supernatural weaponry.

After this brief victory, the anti-government movement is revealed to be named "The Awakened", who invite the player to join them. They work in tandem with an ancient religious order led by Boz, a mystical being that exists in purely electronic form on the computer networks of Omikron. The Awakened refer to the protagonist as the "Nomad Soul", since they have the ability to change bodies at will. The Nomad Soul learns afterwards that what is going on in Omikron is merely an extension of an old battle between mankind and demons spearheaded by the powerful Astaroth. Astaroth, who was banished to the depths of Omikron long ago, is slowly regenerating power while using demons to both collect souls and impersonate high members of the government. The Nomad Soul harnesses ancient, magical technology in order to destroy Astaroth. They return to their own dimension, and prevent their soul from being captured by demons.