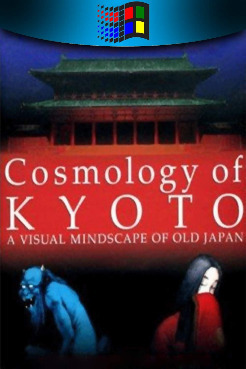 Cosmology of Kyoto is a visual novel adventure game developed by Softedge and published by Yano Electric. It was released for Japan in 1993, and then in North America, for the Macintosh in 1994 and then for the PC in 1995.

It is a game where the player, from a first-person perspective, explores ancient Kyoto city during 10th-11th century Japan. The game lacks a clear goal, but is instead nonlinear and emphasizes open exploration, giving players the freedom to explore the city and discover many pathways, buildings, situations, stories and secrets. The game deals with historical, horror, religious and educational themes, and features karma and reincarnation gameplay mechanics. Released on CD-ROM, the dialogues in the game are fully voiced in Japanese, with English subtitles in the localized North American version. The game was not a commercial success, but was critically acclaimed and attracted a cult following.

The game is controlled by clicking hotspots and text options when appropriate. The user also types in sentences, upon occasion. At the start, the player character is created by the player using a character creation system, with the player able to customize what the player character looks like. As the game begins, the player character is born and must take the clothes off a nearby corpse. The game does not have a clear goal, but is instead nonlinear and emphasizes open exploration, giving the player the freedom to explore Kyoto, with many pathways, buildings, situations, stories and secrets to discover throughout the city, including both realistic and supernatural elements. The progress through the city effects a journey through history, with a street map and online guide provided to ancient (and modern) Kyoto at various points through the game. It provides enough freedom to allow for the player to experiment with the game, such as using it as a resource for their own role-playing game campaign, for example.

The game uses karma and reincarnation gameplay mechanics, based on Buddhist concepts. During the game, the player will often die after being attacked by evil demons or robbers, and will then go to one of the realms of reincarnation, depending upon the player's conduct in that life. In these Buddhist hells, the player character is tortured in various ways. Once the player escapes hell, they are reborn, as a new character with a new appearance. If the player's with too much negative karma, they may be reincarnated as a dog rather than a human. After being reborn, the player must take the clothes from his or her last body to continue. As the player progresses through the city, new abilities and items are revealed that protect the player from death.

The game is set in the medieval city of Kyoto around the year 1000, during the Heian period of Japanese history. The game lacks an overall plot, but it instead presents fragmented narratives in a non-linear manner, as the player character encounters various non-player characters while wandering the city. These narratives are cross-referenced to an encyclopedia, providing background information as the narratives progress and as the player comes across various characters and locations, with various stories and related information appearing at distinct locations.

The game's readme.txt file has the following quote:

"Today the outlook and spirit of the ancient capital is increasingly recognized as a key to the understanding of Japanese and East Asian civilization, throwing light on the roots of modern patterns and problems."

The game was authored using Macromedia software, and distributed in the United States by Scientia Software.

In September 1994, a review by film critic Roger Ebert was published in Wired magazine, where he stated the "richness is almost overwhelming", noting "the resources of this game are limitless", that "no two players would have the same experience" and that he had barely "begun to scratch the surface" of the city despite exploring for two weeks. He stated it was "the most beguiling computer game I have encountered, a seamless blend of information, adventure, humor, and imagination" with "the gruesome side-by-side with the divine." He praised the "hauntingly effective" widescreen graphics, the "vivid facial characteristics" of the characters (describing them as "a cross" between "medieval Japanese art" and "modern Japanimation"), and the voices "filled with personality". He concluded it to be "a wonderful game" where there "is the sense, illusory but seductive, that one could wander this world indefinitely." Later in 2010, he mentioned it in a column on whether video games can be art. After previously arguing that videogames are categorically not art, he stated, "In my actual experience, I have played Cosmology of Kyoto, which I enormously enjoyed, and Myst, for which I lacked the patience." Cosmology of Kyoto is the only video game that Ebert is known to have reviewed and enjoyed. In October 1994, Los Angeles Times published a review by David Coller, who described it as an "adventure-cultural-historical game" that is "graphically violent at times," but a "cerebral game" that "in no way resembles Doom or Rebel Assault", stating "you have to throw away your Western ideas about game play". He stated he could not find an ending "even after many hours of play" but praised the graphics and soundscape as "beautiful" and concluded it to be "truly unsettling." Stone Bridge Press founder Peter Goodman also praised the game, stating he had "never gotten to the end of it" but "it sure is beautiful", which Coller agreed with.

The Bizarre Adventures of Woodruff and the Schnibble
hit
upd
new