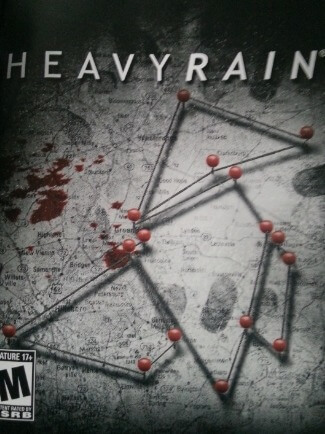 Heavy Rain is an interactive drama and action-adventure game developed by Quantic Dream and published by Sony Computer Entertainment, released for PlayStation 3 in February 2010. The game features four protagonists involved with the mystery of the Origami Killer, a serial murderer who uses extended periods of rainfall to drown his victims. The player interacts with the game by performing actions highlighted on screen related to motions on the controller, and in some cases, performing a series of quick time events. The player's decisions and actions during the game affect the narrative; the main characters can be killed, and certain actions may lead to alternative scenes and endings.

Game developer David Cage wrote the 2,000-page script, acted as director for the four years of development, travelled to Philadelphia to research the setting, and intended to improve upon what was flawed in his 2005 game Fahrenheit. Composer Normand Corbeil wrote the score, which was recorded at Abbey Road Studios. Heavy Rain was a critical and commercial success, winning three BAFTA awards and selling over five million copies. The game received praise for its emotional impact, visuals, writing, controls, voice acting, and music; critics conversely faulted the controls, voice acting, and plot inconsistencies. It was released for PlayStation 4 in 2016 and Microsoft Windows in 2019.

Heavy Rain is an interactive drama and action-adventure game in which the player controls four different characters from a third-person perspective. Each playable character may die depending on the player's actions, which create a branching storyline; in these cases, the player is faced with quick time events. The game is divided into multiple scenes, each centring on one of the characters. Holding down R2 moves the character forward and the left analogue stick controls the direction. Interaction with the environment is done by pressing on-screen, context-sensitive prompts, using the right analogue stick, and performing Sixaxis control movements with the DualShock 3 or 4. Also featured are difficulty levels that the player can change at any point during the game. A chapter-select screen offers the function of playing scenes over again. With PlayStation Move, the player wields either the motion and navigation controllers, or the DualShock and motion controllers.

The day after celebrating his son Jason's tenth birthday, Ethan Mars (Pascal Langdale) and his family go shopping. Jason and Ethan are hit by a car; Jason dies, and Ethan falls into a six-month coma. After he wakes from the coma, Ethan, blaming himself for Jason's death, divorces his wife Grace and moves into a small suburban house. He experiences mental trauma and blackouts. Two years later, while at the park with his other son Shaun, Ethan blacks out. When he wakes up, he discovers that Shaun has been kidnapped by the "Origami Killer", a serial killer whose modus operandi consists of abducting young boys during the fall season, drowning them in rainwater, and leaving an orchid on their chests and an origami figure nearby. FBI profiler Norman Jayden (Leon Ockenden) investigates the death of another Origami victim and concludes that he died the same day as a violent rainstorm, which flooded the cell where he was kept. Based on weather patterns, he estimates that Shaun has only three days to live.

Besieged by reporters, Ethan checks into a motel. He receives a letter from the killer, which leads to a shoebox containing a mobile phone, a handgun, and five origami figures. The killer calls him and explains that each of the figures contains instructions on how to complete tests that will determine how much Ethan loves his son. If he completes them, he will receive a piece of the address where Shaun is held. The tests include driving against traffic at speed on the highway, crawling through broken glass and active electrical pylons, cutting off one of his fingers, murdering a drug dealer, and drinking poison on camera. Ethan meets Madison Paige (Jacqui Ainsley and Judi Beecher), a journalist who sometimes uses the motel to deal with her insomnia. She decides to conduct her own investigation into the Origami Killer. Jayden and his partner, Lieutenant Carter Blake, investigate suspects including a butcher and a religious fanatic, but nothing pans out until Grace Mars arrives at the station, fearing that her former husband is involved in Shaun's disappearance. After Ethan's psychiatrist reveals that his patient has a history of blackouts, Blake and his superiors put out a warrant for his arrest. Unconvinced, Jayden continues to investigate other leads. Meanwhile, private investigator Scott Shelby (Sam Douglas) meets the families of the Origami Killer's victims, collecting the letters and other items they received when their loved ones were abducted. A prostitute named Lauren Winter, the mother of an abducted boy, persuades Scott to let her accompany him. Their investigation leads them to an attention-seeking playboy who claims to be the killer, but when they try to question him, they are knocked out and wake up in a car sinking to the bottom of a river. After getting Lauren to safety, Scott tracks down the playboy's father and forces him to confess that his son was responsible for an incident years earlier in which a boy was killed.

Heavy Rain was included in the book 1001 Video Games You Must Play Before You Die. Out of a focus group of seventy, it was determined that none had assessed who the killer was before the game revealed it. David Ellis of 1UP.com praised the quality and detail of the sets as "spectacular", noting that the world felt "lived-in and genuine"; the characters were said to have a similar "gritty realness". Ellis' view was that the game relayed an emotional subtlety that "very few games have ever succeeded at", and that knowing the characters bore potentially fatal outcomes added "a stressful layer" to an otherwise tense experience. Edge staff complimented Heavy Rain on its unmatched "compulsive pull", writing that the "gruesome curiosity" of the challenges was reminiscent to that of the Saw franchise. The realism, "aptly conjured" with quality lighting, and "filmic cliché", only considered effective for its sparse use, were observed as treading a "fine line". Eurogamer's Tom Bramwell saw the writing as full of "compassion and bravery" and commented that it was a game "where pulling the trigger makes you really feel something". Joe Juba at Game Informer commended the "astounding detail" and computer facial animation of the characters. Juba enjoyed the "moody musical score" as well as the voice actors, some of whom he called "exceptional". Declaring the game a "masterpiece", he also praised the storytelling and character development for demonstrating the "untapped potential" of interactive entertainment. The controls were lauded for contributing to the more poignant scenes. Lark Anderson, writing for GameSpot, termed Heavy Rain an "absorbing experience" that showed, in meticulous fashion, the characters' tension, urgency, surprise, and tragedy. Like Juba, he liked how the controls lent themselves to developing the emotional states of the characters. The story, Anderson felt, was its greatest strength, complemented by "outstanding" visual design and "hyperrealistic" character models. The orchestral score and "mostly great voice acting" were also subject to approval. Anthony Gallegos from GameSpy stated that Heavy Rain had produced "the most intense emotional experience I've had with a controller in my hand". Gallegos said the quick time events were of intuitive value and gave credit to Quantic Dream for making "incredible-looking character models". Chris Roper of IGN found the control mechanics praiseworthy, citing the choice and influence of the button prompts as a "key element" to how it distinguished itself from other games. He admired the main characters for being well developed, interesting, and integral to the story. The script was dubbed "easily amongst the best" among games.