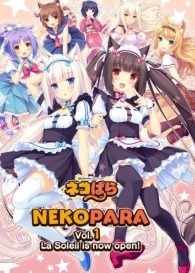 Nekopara (Japanese: ネコぱら) is a series of adult visual novels developed by Neko Works and published by Sekai Project. The first game in the series, Nekopara Vol. 1, was released on December 30, 2014. The series is set in a world where humans live alongside catgirls, known as "Nekos", and are able to keep them as pets.

An anime television series adaptation by Felix Film has been announced.

Nekopara is a visual novel series, so the majority of the gameplay consists of the player reading the game's story. Nekopara does not offer choices to the player throughout gameplay, and the player has no influence over the story. The games are fully voiced (except for the protagonist) and use a system called "E-mote" that allows the in-game characters to be animated, instead of stationary sprites. Nekopara Vol. 0 added a new feature where the player can click on characters in-game, to "pet" them. The characters will react in different ways depending on where the player pets them.

Kashou Minaduki is an aspiring chef who moves away from home to open his own confection shop. While he is unpacking in his new shop, he discovers that two of his family's Nekos, Chocola and Vanilla, came along with him by hiding in cardboard boxes. After the two Nekos convince Kashou to let them stay and live with him, the three of them work together to run his shop, La Soleil. During the story, Kashou receives a couple of visits from his younger sister Shigure and the other four Nekos owned by their family.