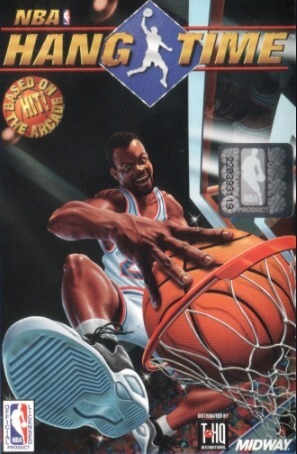 NBA Hangtime is a basketball video game developed and published by Midway and released in arcades in 1996. Home versions were released for the Nintendo 64, PlayStation, SNES, Sega Mega Drive/Genesis, and Microsoft Windows. A version for Game.com was cancelled.

Hangtime was the third basketball game by the original development team behind the NBA Jam series. The title was changed due to the NBA Jam name being acquired by Acclaim Entertainment, the publisher of the games for the home market. Acclaim's NBA Jam Extreme was released the same year as Hangtime. Features introduced in Hangtime included character creation, alley oops, and double dunks. A software update known as NBA Maximum Hangtime was released for the arcades later in the life cycle. A sequel, NBA Showtime: NBA on NBC, was released in 1999.

The theme song "Whatcha Gonna Do?" was produced by rapper M-Doc of Indasoul Entertainment.

The gameplay is largely the same as the Midway's NBA Jam games, with some additions. One of the most prominent additions is the "Create Player" feature, which allows players to create a custom basketball player, specifying height, weight, power, shooting, and defensive skills using a limited number of attribute points. Created players can be made more powerful as players earn additional attribute points by winning games.

The game retains many of the same rules of NBA Jam: Tournament Edition, including the two-on-two match ups, statistics tracking, legal pushing and "on fire" mode. Additions to the gameplay include spin moves, alley oops and double slam dunks - a slam dunk performed after one team member in the middle of a dunk passes to the other member. Alley-oops and double dunks can trigger the new "team fire" mode in which both team members are on fire.

Each team now has five members of the roster to choose from. The original arcade version features team rosters from the 1995-96 NBA season, while the home console versions feature team rosters that were accurate to the 1996-97 NBA season. The player can select from any of the 29 NBA teams and match them in four quarters of NBA basketball (three minutes each), with three-minute overtimes if necessary. Just as in the NBA Jam games, the game can keep track of the teams a player has beaten using a player's created ID and PIN. Optionally, the player can load their created player. Players using their ID face off against a series of NBA teams, starting with the Vancouver Grizzlies and ending with the Chicago Bulls (who were on their way to being NBA champions at the time of the game's release). After beating all 29 teams, the player faces off against a number of secret characters.

New to the game is a three-digit "combination lock" feature. Similar to the "Kombat Kodes" in Mortal Kombat 3, the feature allows players to enter codes on the Match Up screen that alter the game's appearance and/or gameplay.

The initial arcade version and the home versions included an NBA trivia quiz at the end of each game played. Answering enough trivia questions correctly in the arcade game originally qualified players for a prize drawing, while on home versions it gives players more attribute points for their created players.

In the Nintendo 64 version, Kobe Bryant is a member of the Los Angeles Lakers and somewhat is a hidden character due to his inclusion in NBA Courtside; Michael Jordan, Charles Barkley and Muggsy Bogues were not allowed in the game due to the movie Space Jam. However, Patrick Ewing, Larry Johnson and Shawn Bradley, who were also in the movie appeared in the game. Shaquille O'Neal was initially meant to be added to the game, but contract mismanagement with Midway and the O'Neal family prevented him from being made in either version of the game.

Computer and Video Games dubbed Hangtime "the real, and quite worthy, successor to NBA Jam TE". The graphics improvements were lauded, as were the new features, moves and the created player feature. A reviewer for Next Generation likewise attested that "NBA Hangtime has all the playable qualities of NBA Jam, plus a slew of perks that make this worthy of your arcade quarters." He was particularly impressed with the Create a Player mode, and said the fact that this costs an extra quarter is more than balanced by the fact that the custom player is permanently written into the arcade cabinet's memory. Despite this, he scored it only 3 out of 5 stars.

The home ports received mixed reviews. In contrast to their reviews for the arcade version, most critics remarked that the game does not offer enough new features over NBA Jam, though they disagreed as to how much of a problem this is. Reviewing the Nintendo 64 version, Air Hendrix of GamePro concluded that "Jam-style hoops is nothing new, but Hangtime does it with enough flash and freshness to keep you happily dunkin' like a fool." He cited the selection of players, numerous secrets, smooth graphics, multiplayer matches, and create-a-player mode. He rated the Genesis version lower in every category except control, noting the weaker sound effects and announcer's voice. However, he gave it a similar recommendation. GamePro's The Rookie found that the Super NES version likewise suffers from inferior graphics and sound but is still highly enjoyable to play. Doug Perry of IGN also praised the create a player feature, calling it "easily one of the coolest elements of the game, and separates it from the pack." Perry wrote that the port didn't make much use of the N64's capabilities, but called it a "fun, arcade-perfect port that will bring most basketball fans lots (sic) enjoyment." GameSpot was far more negative, with Jeff Gerstmann reviewing the N64 version and writing that the game only featured "minor changes" and concluding "Unless you've been shooting digital hoops in a cave for the past few years, you've seen it all before." A reviewer for Next Generation agreed: "Basically, if you've played NBA Jam, then you've played most of NBA Hangtime." He further criticized that aside from the support for four players without the use of a multitap, the game make poor use of the Nintendo 64's capabilities, with 2D graphics and a low frame rate. He went so far as to say that the Super NES version of NBA Jam looks equally good and plays better due to the more appropriate controller. The two sports reviewers of Electronic Gaming Monthly had a more middling response. Joe Rybicki, similarly to Gerstmann and Next Generation, said the game "offers basically nothing new, except updated players and bigger character sprites." Co-reviewer Todd Mowatt, while criticizing that the AI tends towards goal-tending, felt the game was an overall improvement over the 16-bit basketball games.

The PlayStation version was criticized for its long loading times and rampant slowdown, and reviews uniformly recommended buying the Nintendo 64 version instead. Kraig Kujawa was far more positive about the PC version, saying that it was an accurate conversion, although lamenting that it didn't include online play.