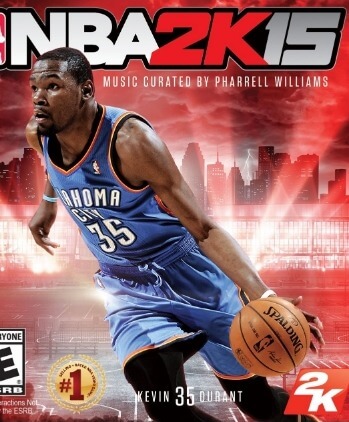 NBA 2K15 is a basketball simulation video game developed by Visual Concepts and published by 2K Sports. It is the sixteenth installment in the NBA 2K franchise and the successor to NBA 2K14. It was released in October 2014 for Microsoft Windows, Xbox One, Xbox 360, PlayStation 3 and PlayStation 4. Kevin Durant of the Oklahoma City Thunder, one of the three cover athletes of NBA 2K13, is the solo cover athlete of NBA 2K15. NBA 2K15 was succeeded by NBA 2K16.

NBA 2K15 allows players to scan their faces into the game for created players, using the PlayStation Camera on PlayStation 4 or the Kinect on Xbox One. The 3D mapping process creates a realistic rendition of the gamer's face to make their gaming experience as real as possible. The process of scanning the face will take about 30 seconds. Players need to get very close (6-12 inches) to the camera and slowly turn their heads 30 degrees to the left and right during the scanning process.

For 8th-Gen systems (PC, PlayStation 4 and Xbox One), MyCareer Mode has been revamped with new additions such as the mentor and upgrading system. The player's MyPlayer speaks to the leader of the team before and after games. 2K implemented their voices providing for a more in-depth user experience. These features have allowed for a greater "storyline" to be integrated into MyCareer mode. MyCareer also uses a new upgrading system which gets more virtual currency from endorsement deals, completing challenges, and badges (which come in bronze, silver, and gold). However, on 8th-Gen systems, players cannot view playoff stats or the playoff tree.

A new coach satisfaction system has been introduced that provides real-time feedback based on the MyPlayer's court performance. MyPlayer is mentored by Los Angeles Clippers head coach Doc Rivers, who will either praise or admonish the player based on their gameplay.

The game included a pre-order bonus pack which includes 5,000 Virtual Currency (VC), 2 MyTEAM card packs, a choice of an International MyTEAM card or rookie Kevin Durant, and MyPLAYER jerseys inspired by Durant. On August 6, 2014 it was announced that Crew will be back in the game for current-gen consoles, then on August 7, 2014 it was announced that the game would have a new mode called MyLeague, which is similar to NBA 2K14's GM mode but with added customization and improvements. New RPG elements have also been introduced to the game, such as the conversation system and press conferences. On September 17, 2014 it was announced a face scanning system would be introduced into the game, allowing players to add their own likeness into the game. There is a MyNBA2K15 mobile app that came out along with the game. It was also announced in August 2014 that the PC version would essentially be the same as the Xbox One and PlayStation 4 versions, making use of graphical enhancements first introduced in the eighth-generation versions of NBA 2K14.

The soundtrack was curated by Pharrell Williams.

Josiah Renaudin of GameSpot gave the game a 9/10, praising the control scheme, realistic presentation and animations, unparalleled level of customization and the helpful shot meter, but stated that the visual update is not as drastic as NBA 2K14.

Andrew Fitch of Electronic Gaming Monthly gave the game a 6/10; he stated in his review that the game delivers a solid core basketball experience, particularly with MyCareer mode, which features real-life NBA player voices, but criticized that the online component and broken server, which can make the game unplayable, wrecks the overall experience.