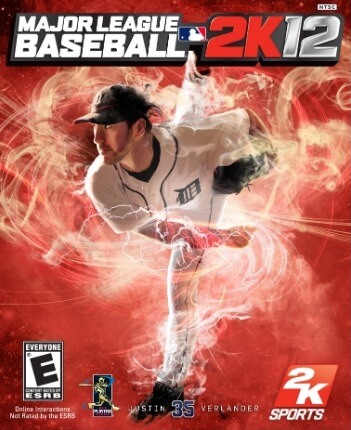 Major League Baseball 2K12 or, in short, MLB 2K12, is a Major League Baseball licensed baseball simulation video game published by 2K Sports that was released for the PlayStation 2, PlayStation 3, PlayStation Portable, Microsoft Windows, Nintendo DS, Wii and Xbox 360 on March 6, 2012. The commentary is delivered by the trio of Steve Phillips, Gary Thorne, and John Kruk. Justin Verlander of the Detroit Tigers is the game's cover athlete. Verlander won both the AL Cy Young Award and the AL MVP Award in 2011.

The following features have been confirmed:

The Perfect Game Challenge is a competition where players will compete to pitch a perfect game in MLB 2K12.

Franchise Mode is a mode where a player can play through multiple MLB seasons with one team, all while signing free agents, making trades, drafting players and setting rosters for that team and its minor league affiliate teams. However, it is not as in-depth as MLB Today Season Mode, and more than one game may be played in a day in Franchise Mode. You can edit your players abilities in all areas unlimited times, making it possible to make your entire team perfect. You can also edit their contracts, so you can say you will pay them whatever they want just to sign them and then lower their salary as much as possible. These things can be seen as good or bad. They are good for players who will do anything to win, but you don't have to do any of it if you consider it to be "cheating." You are also free to change the difficulty level and/or sliders as much as you want to, or not at all, during a franchise.

MLB 2K12 makes pitcher and batter interactions more realistic than ever before, as certain pitches will decrease or increase in effectiveness against certain players, depending on their strengths and weaknesses.

MLB 2K12 has a new throwing system and variation and realism in the hits.

MLB 2K12 features improved gameplay from the previous installments, including improved AI, as well as improved graphics and lighting.

MLB 2K12 features all of the real-life MLB logos, uniforms, and ballparks.

Major League Baseball 2K12 received mixed reviews from critics and fans alike. IGN.com gave it a 7/10, saying,"MLB 2K12 represents a year in baseball that's about minor polish rather than major innovation. Certain elements of the evolving formula from 2K10 and 2K11 find great success this year, but overall 2012 marks a standard year for a good game of baseball." GameSpot gave it a lower rating of 5.5/10 commenting that "it's hard to recommend this brand of baseball." The game was again compared unfavourably with its rival the MLB: The Show series.

End of the Series

2K Sports gave many signals on May 22, 2012 that the game would mark the end of the MLB 2K series. The game was left off the list of games for 2K's 2013 fiscal year, which was the same way they signaled the end of the NHL 2K series (although it returned on mobile devices in 2014) and the College Hoops series. A Take Two spokesman commented, "Our legacy Major League Baseball agreement will sunset in fiscal 2013. MLB 2K12 is our last offering under that agreement. At this time, we have no further comment."