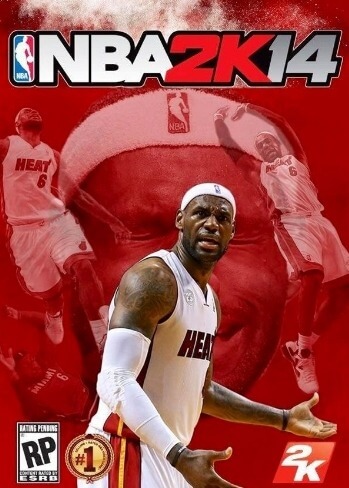 NBA 2K14 is a basketball video game developed by Visual Concepts and published by 2K Sports. It was released on October 1, 2013, for Microsoft Windows, PlayStation 3, and Xbox 360, and the PlayStation 4 and the Xbox One versions were released on the consoles' respective launch dates. LeBron James of the Miami Heat became the cover athlete, and also served as the music curator for the game. 2K Sports also released the DLC pack that as a bonus for pre-ordering the game, they would receive 10,000 VC, bonus content for "Path to Greatness" mode, adding James in the Blacktop mode and a signature skill for MyCareer mode. On August 14, 2013, 2K Sports announced that Crew Mode would return to this year's installment of NBA 2K. NBA 2K14 is the successor to NBA 2K13 and was succeeded by NBA 2K15 in the NBA 2K series.

On July 2, 2013; 2K Sports and EuroLeague signed an exclusive multi-year deal to include teams in the game. This marks the first time EuroLeague teams have appeared in the NBA 2K series, similar to EA's NBA Live series, which included FIBA teams and also the U.S. national basketball team found in 2K13, beginning with Live 08 and ending with Live 10.

Ryan McCaffrey of IGN rated the game a 9.3 praising the gameplay saying, "With just enough new features, and tighter-than-ever gameplay, NBA 2K14 tops its predecessors and competitors... again". Tom McShea of GameSpot rated the game an 8.0 praising the game as well but criticizing designing of the game. USA Today's Brett Molina rated the game 3.5 out of 4 stars, noting that the game's new dribble and shoot mechanics may be simpler to newcomers, but frustrating to veteran gamers.

Shortly after release, the game was the best-selling sports game on 8th-consoles.

As well as the aforementioned new soundtrack and inclusion of EuroLeague teams (at the expense of the "Celeb" team, "Team USA", "Dream Team" and 2001–2002 Sacramento Kings classic squad), several new changes have been made since 2K13:

"LeBron: Path to Greatness" mode, which is not found on the PlayStation 4 and Xbox One versions of the game, is reminiscent of a cut-down version of NBA 2K11's Jordan Challenge, where players get to control LeBron James' career as they attempt to win multiple rings (although his future is somewhat laid out by the game and choices are limited).

New signature skills, including an exclusive pre-order "LeBron Coast to Coast" skill (Speed, Quickness and Ball-Handling attributes are boosted 4 points and the shot penalty enforced for hitting a defender is decreased), One Man Fastbreak (a speed and handling increase on a fastbreak), Pick Dodger (player doesn't get caught on screens), Tenacious Rebounder (increase in rebounding skill), Flashy Passer (less likelihood of a "flashy pass" going astray - see below), Screen Outlet/Pick & Roll Maestro (skills which give boosts in pick and roll situations). a new way of passing by holding a trigger and pressing a control stick in the direction the player want to pass (includes blind passes).

The "potential" stat is now limited and restricts the overall level a player can grow to, rather than increasing as the player improves (as happened in previous NBA 2K titles). This seems like a minor change but it has severely limited the amount by which players' stats can improve in Association Mode (and fixes one of the most often requested Association Mode flaws; too many players turning into superstars in Association Mode).

A new "Training Camp" mode, which is there to guide players to master the new controls.

Training Drills now have their own menu in My Career mode, meaning players don't have to return to the main menu (and back again) to do multiple training sessions.