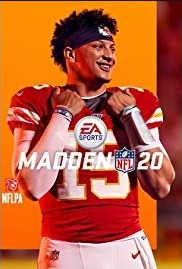 Madden NFL 20 is an American football video game based on the National Football League (NFL), developed by EA Tiburon and published by Electronic Arts. The latest installment in the long-running Madden NFL series, the game was released for PlayStation 4, Xbox One, and Microsoft Windows on August 2, 2019. It features Kansas City Chiefs quarterback Patrick Mahomes as the cover athlete.

Kansas City Chiefs quarterback and 2018 NFL MVP Patrick Mahomes was unveiled as the cover athlete alongside the game's announcement on April 25, 2019, becoming the first Chiefs player to be the cover athlete.

The soundtrack includes 22 original tracks written specifically for the game, a first for the Madden franchise. Featured artists include Sage the Gemini, Denzel Curry, Joey Badass, Jay Park and Saweetie.

Madden NFL 20 features a new "personalized career campaign" known as Face of the Franchise: QB1, following the journey of a player-created college quarterback from their participation in the College Football Playoff, to being drafted by an NFL team. Ten licensed college teams (Clemson, Florida State, Miami, Florida, LSU, Oregon, USC, Texas, Oklahoma and Texas Tech) from the ACC, Big 12, Pac-12, and SEC, are available in this mode. The mode acts as an updated version of the "Superstar Mode", where the player would take their custom player and control them throughout a career, which was featured from Madden NFL 06 until its removal in Madden NFL 25.

The game was released on August 2, 2019. It was able be accessed three days prior on July 30 by those players who purchased the "Superstar" or "Ultimate Superstar" editions of the game, which included packs and special abilities.

According to review aggregator website Metacritic, Madden NFL 20 received "generally favorable" reviews from critics for the console versions and "mixed or average" reviews for the PC despite receiving "overwhelming dislike" ratings from users for all three versions.

IGN gave the game an 8.1/10 and wrote: "Madden NFL 20's new superstar players and control refinements make its moment-to-moment gameplay the best the series has seen this console generation, but areas like Franchise have been left behind." In its 8/10 review, GameSpot wrote that "Madden NFL 20 is an improved version of the annualized professional football series that excels in some areas and leaves something to be desired in others."

GamesRadar+ praised the updated story mode in comparison to Longshot and the addition of the X-factor players, saying that the game "clears the roster and properly initiates the rebuilding phase for football's first franchise," although noted Franchise mode again felt neglected. Game Revolution, which gave Madden NFL 20 a 3/5, also praised the X-factor addition, saying stars felt "bigger than ever", but was equally disappointed with the lacking in Franchise mode. Game Informer gave the game a 7.5/10, summarizing its review with: "New features can only do so much for a series that needs work in multiple areas."

In a scathing review, Shacknews gave the game a 4/10, calling it "the worst major sports league video game out there," criticizing EA for only making marginal improvements to previous installments.