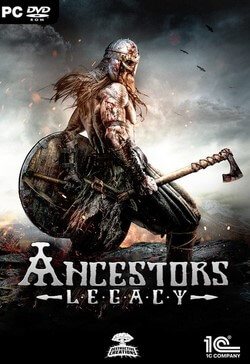 
Ancestors Legacy is an RTS game which was developed by Polish studio Destructive Creations and published by the 1C Company. It was released on Windows on 22 May 2018 and on Xbox One and PlayStation 4 in 2019.

Ancestors Legacy was announced as being in development phase on 10 May 2017. Following the announcement, the company launched its first trailer of the game on July 31 which depicted over a 100 battles in a historically-accurate armaments. The game had entered into an open beta phase on 5 February 2018. The game's single player preview beta build was released during the Gamescom on 3 September 2017.

Initially both version supposed to come out on the same day (22 May), but then on 22 August 2018, at the 2018 Gamescom it was announced by the 1C Company that the Xbox One version is soon to come out.

The player has a choice to play the campaign scenario or multiplayer game in which he can choose to play one of the four civilizations: Vikings, Anglo-Saxons, Teutons, or Slavs  (Saracens with the Saladin's Conquest DLC). The game features a day/night cycle which changes the way factions play.

The multiplayer aspect of the game provides Domination and Annihilation choices during which a player can have as many as 10 squads. Multiplayer battles can take place on 15 maps prepared for 2, 4 or 6 players (1v1, 2v2 or 3v3).

In September 2018, Destructive Creations had added a second Slav campaign where the player can lead Bolesław I the Brave of Poland and his son Mieszko II.

In December 2018, Destructive Creations had announced the release of a free-to-download campaign called Ancestors Legacy: History of the Teutonic Order. The campaign, which is made out of five story missions, is divided in two parts. The first part will tell the story of Herkus Monte and his rebellion against the Teutonic Order during the Great Prussian Uprising in Magdeburg. The second part of the campaign is dedicated to the Commander of the Teutonic Order Konrad von Tirberg and the siege of rebel bastion, the Lidzbark Castle. All of the new content is set in the 13th century.

In May 2019, Destructive Creations have released a paid DLC titled Ancestors Legacy: Saladin's Conquest. The DLC contains a new nation of Saracens and mainly a brand new campaign, but this time Ancestors Legacy leaves the European soil and tells a completely different story from the perspective of Saladin, the first sultan of Egypt and Syria. It contains five new missions, 3 new multiplayer maps and new achievements.