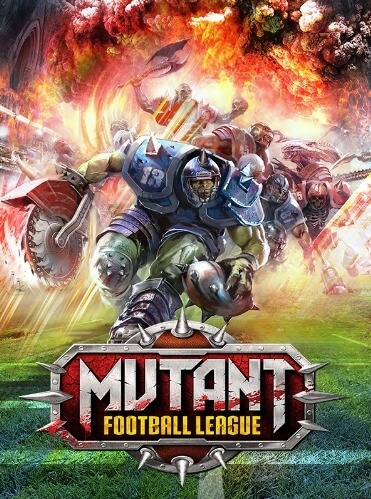 Mutant Football League is an American football video game. It is a spiritual successor to Electronic Arts' Mutant League Football. The game was released on Microsoft Windows on October 31, 2017, released for PlayStation 4 and Xbox One on January 19, 2018, and on Nintendo Switch on October 30, 2018.

The game was developed by Digital Dreams Entertainment, led by Michael Mendheim, designer of the original Mutant League Football game. In 2013, Mendheim ran a Kickstarter campaign to fund the game's development, asking for $750,000. The project failed to reach its goal, but Mendheim persisted with the project. In 2017, a second Kickstarter campaign raised a more modest goal of $60,000. Mendheim stated that due to the original funding failure the game will not have as much content as originally planned, and that the main purpose of the second Kickstarter was to fund development of online multiplayer.

Mutant Football League is a violent, over-the-top interpretation of the game of football. It draws inspiration from the original Mutant League Football, as well as other games in the genre such as NFL Blitz.

The game features 7-on-7 action, with teams made up of various mutants, including Skeletal Deadheads, Monstrous Orcs, BruiserBots, Mutant-Humans, Hell-Spawned Demons, Rampaging Werewolves, and Criminal Aliens. The fields are littered with obstacles, including buzzsaws and landmines. Players can call normal plays, as well as "dirty tricks", which include bribing the referee, and using a chainsaw to cut through the opposition.

Croakland Invaders (consists of all Skeletal Deadheads and one Monstrous Orc)

Tokyo Terminators (consists of all BruiserBots)