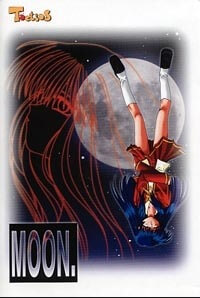 Moon (styled as Moon.) is a Japanese adult visual novel developed by Tactics, a brand of Nexton, released on November 21, 1997 playable on Windows PCs. The game was described by the development team as a "Reaching the Heart AVG" (心に届くAVG Kokoro ni Todoku AVG). The story follows the protagonist Ikumi Amasawa, a teenage girl who joins a mysterious organization called Fargo in the hopes of discovering why and how her mother died, who was a member of the same group. The gameplay in Moon follows a branching plot line which offers pre-determined scenarios with courses of interaction, and focuses on the three female main characters. The game ranked twice in the national top 50 for best-selling PC games sold in Japan.

Much of the staff that created the game later became the founding members of the visual novel brand Key. Moon was the starting point for Key's origins, and was the first time the principal Key team was formed. A novel based on the game written by Midori Tateyama was released in July 1998 by Movic. The game's original soundtrack was released bundled with Dōsei's soundtrack in August 2000 at Comiket 58; Dōsei was Tactics' first game. Moon has been referenced in other media not directly related to the game, such as in Tactics' third game One: Kagayaku Kisetsu e, and in the second anime adaptation of Key's first game Kanon.

Moon is a drama and horror visual novel in which the player assumes the role of Ikumi Amasawa. Much of its gameplay is spent on reading the story's narrative and dialogue. Moon follows a branching plot line with multiple endings, and depending on the decisions that the player makes during the game, the plot will progress in a specific direction.

There are three main plot lines that the player will have the chance to experience, one for each of the heroines in the story. Throughout gameplay, the player is given multiple options to choose from, and text progression pauses at these points until a choice is made. To view all plot lines in their entirety, the player will have to replay the game multiple times and choose different choices to further the plot to an alternate direction. The player has to manually navigate through the corridors of Fargo to explore the surroundings.

The game is split into 20 sub-parts each given a title in English written mostly in white where a portion of the title is displayed in red, and each covers a single day. There are seven endings to the game: a single true end, two normal ends, and four bad ends. In the original game, a bonus role-playing game became available on the title screen after the game was completed at least once. This was later removed from the full-voice DVD edition of the game. There are scenes in Moon with sexual CGs depicting a given heroine having sex.

Moon's story revolves around a mysterious organization known as Fargo. The protagonist of the story is a young high school girl named Ikumi Amasawa (天沢郁未 Amasawa Ikumi, voiced by: Ruru) who discovers that Fargo was involved with the death of her mother Miyoko Amasawa (天沢未夜子 Amasawa Miyoko) six years before the story begins. Miyoko, who would often make special cream stew for her daughter, was a member of Fargo. Following this revelation, Ikumi joins Fargo to discover how and why her mother died while also slowly uncovering the group's disturbing nature of harnessing psychic abilities through torture. Ikumi ultimately wants to take out her revenge against Fargo for killing her mother.

Ikumi had been one of a large group of young girls her age that gathered at a seminar for people of all ages, both male and female, who wanted to join Fargo for different reasons. Ikumi had been ordered to get on a truck which would take the group to Fargo, and on the ride, Ikumi meets two other girls with similar goals in mind as her. One of the girls is named Haruka Mima (巳間晴香 Mima Haruka, voiced by: Aya) who joined Fargo in order to save her older brother. She starts to work with Ikumi for the sake of their mutual goals. The second girl is named Yui Nakura (名倉由依 Nakura Yui, voiced by: Miya Serizono) who is searching for her older sister Yuri Nakura (名倉友里 Nakura Yuri, voiced by: Komugi Nishida) who joined Fargo in order to obtain the 'invisible power', a kind of extrasensory perception. Yui has an optimistic personality which hides a gloomy past of which she has no memory of. Each of the girls have a strong will to complete their respective purposes, and they help each other along the way.

At Fargo, Ikumi meets others who are affiliated with the group. One such person is Yōko Kanuma (鹿沼葉子 Kanuma Yōko, voiced by: Satomi Kodama), a modest believer in Fargo's cause; something happened in her past related to her mother. At Fargo, Ikumi begins living with a teenage boy known as "Shōnen" (少年, lit. Boy or Young man, voiced by: Arashi Tsunami). He helps Ikumi in her search for the answers regarding her mother; it is never revealed what his true name is. Others include Takatsuki (高槻, voiced by: Matsuri Yūatono), a young man in Fargo with an arrogant attitude, and Tsuki (月, lit. Moon), the symbol of Fargo and the mastermind behind the entire operation; he is the main antagonist.

According to a national ranking of how well bishōjo games sold nationally in Japan, the Moon DVD Windows release made the ranking of the top 50 games once at number 44 during the first two weeks of July 2002. Moon Limited also made it on the list only once, achieving the ranking of 48 in late September 2002. Ikumi Amasawa appeared in the Eternal Fighter Zero dōjin games by Twilight Frontier. Four characters from Moon can be seen as background characters during scenes in the cafeteria from One: Kagayaku Kisetsu e; the characters are: Ikumi, Yōko Kanuma, Haruka Mima, and Yui Nakura. There is a reference to Moon in the sixth episode of the Kyoto Animation version of Kanon, which can be seen as the film poster of a horror film that Ayu and Yuichi go to see.