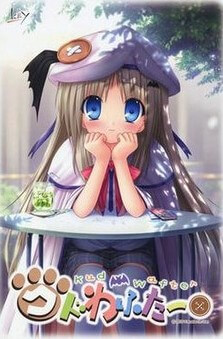 Kud Wafter (クドわふたー Kudo Wafutā) is a Japanese adult visual novel developed by Key, released on June 25, 2010 for Windows. Kud Wafter is Key's eighth game, along with other titles such as Kanon, Air, and Clannad. Key released a version of Kud Wafter without the erotic content, and the game was ported to the PlayStation Portable and PlayStation Vita. The story follows the lives of high school students Riki Naoe and his close friend Kudryavka Noumi as they start to see more of each other in a romantic relationship. The gameplay in Kud Wafter follows a branching plot line which offers pre-determined scenarios with courses of interaction, and focuses on the appeal of the title character Kudryavka, also known as "Kud" (クド Kudo) for short.

The game is a spin-off of Key's earlier game Little Busters! rated for all ages and its expanded, adult version Little Busters! Ecstasy. Kudryavka appears as a heroine in both Little Busters! and Ecstasy. Kud Wafter is an expansion of Kudryavka's story after the events of Ecstasy and is written by Chika Shirokiri. Na-Ga and Itaru Hinoue returned as co-art directors. The game ranked as the best-selling PC game sold in Japan for the time of its release. A manga adaptation illustrated by Bakutendō was serialized in ASCII Media Works' Dengeki G's Magazine. A 40-minute theatrical anime adaptation by J.C.Staff will premiere in September 2020.

Kud Wafter is a romance visual novel in which the player assumes the role of Riki Naoe. Much of its gameplay is spent on reading the story's narrative and dialogue. Kud Wafter follows a branching plot line with multiple endings; depending on the decisions that the player makes during the game, the plot will progress in a specific direction. Throughout gameplay, the player is given multiple options to choose from, and text progression pauses at these points until a choice is made. To view all plot lines in their entirety, the player will have to replay the game multiple times and make different choices to bring the plot in an alternate direction. Throughout gameplay, there are scenes with sexual CGs depicting Riki and Kudryavka having sex. Key released a version of Kud Wafter without the erotic content.

Kud Wafter's story revolves around Riki Naoe (直枝 理樹 Naoe Riki, voiced by: Tomoe Tamiyasu (epilogue only)), the male protagonist from Little Busters! and Little Busters! Ecstasy, and Kudryavka Noumi (能美 クドリャフカ Nōmi Kudoryafuka, voiced by: Miyako Suzuta), one of the main heroines of the same games and the title character of Kud Wafter. Kudryavka has her story expanded upon than what was seen in Ecstasy, which was itself an expansion on the story featured in Little Busters!. Kud Wafter begins at the onset of the summer vacation after the events of the peaceful field trip from Little Busters!. The other members of the Little Busters have returned home for the break, leaving Riki and Kudryavka to spend their vacation living at the school dormitories as they form a romantic relationship. However, the male dormitory is undergoing renovations due to a problem with the plumbing, leaving Riki without a place to stay. As Kudryavka has no roommate, she suggests to Riki that he live with her until the renovation on the male dormitory is finished, and Riki accepts. Riki and Kudryavka try to keep the other dorm members from finding out since it is against the rules for a boy and girl to share a room.

Also living at the dorms is a girl named Yuuki Himuro (氷室 憂希 Himuro Yūki, voiced by: Kumiko Okukawa) whom Kudryavka knew and was roommates with for a time in Kudryavka's home country; Yuuki is half Japanese, a quarter German and a quarter Russian. She is the president of the science club at the school and came to take part in a cultural exchange program. Everyday, Yuuki is absorbed in various strange research projects and experiments and could be described as a logical genius. The head of the girl's dormitory is Kanata Futaki (二木 佳奈多 Futaki Kanata, voiced by: Keiko Suzuki), the only main character other than Riki and Kudryavka to return from Little Busters!. While Kanata is good friends with Kudryavka, she is concerned about Kudryavka's relationship with Riki. Kanata succeeded the previous head of the girl's dormitory, a third-year girl referred to as "A-chan" (あーちゃん, voiced by: Rita). Since she resigned from being the dormitory head, the dormitory rules have become somewhat more relaxed, but she still aides Kanata because Kanata inherited the position. A-chan is the president of the home economics club, which Kudryavka is a member of, and she likes interesting and strange things.