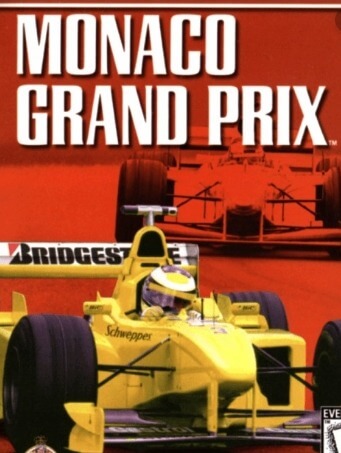 Monaco Grand Prix: Racing Simulation 2, also known as just Monaco Grand Prix, is a Formula one racing game for Microsoft Windows, Nintendo 64, PlayStation, and Dreamcast. It was released in 1999. The game is based on the Formula One World Championship, but does not have the licence to use drivers names, official cars, etc. (the licence was held by Video System at the time, who made F-1 World Grand Prix and F-1 World Grand Prix II). The game does however have a licence to use Formula One's official sponsors; Schweppes and Castrol among others, helping add to the authenticity of the game.

The sequel to F1 Racing Simulation recreates the 1997 season, featuring 17 authentic tracks, 11 teams and cars with their 22 drivers. The Monaco license is used, although the teams themselves are not licensed. A total of 22 camera views are provided. Telemetry is stored and analysed in a similar way to Grand Prix 2, and physics are modeled to be realistic. There are eight different modes to race, the new ones being a career mode in which the player starts with a poor team and must drive well enough to earn competitive rides, and scenarios recreating key races for particular drivers. Returning from the first game are Time Attack, a full championship, and a 1950s retro mode. There is also a track editor for the players to create their own tracks.

Next Generation reviewed the Nintendo 64 version of the game, rating it four stars out of five, and stated that "Thankfully, Monaco Grand Prix: Racing Simulation 2 is very good. With 16 tracks, 22 cars onscreen at the same time, two-player split-screen racing, excellent graphics, details physics, and great gameplay, it's a hard title to stop playing."

The game received "favorable" reviews on all platforms except the Dreamcast version, which received "average" reviews, according to the review aggregation website GameRankings. In Japan, Famitsu gave the latter version a score of 31 out of 40.

Chris Charla reviewed the Dreamcast version of the game for Next Generation, rating it two stars out of five, and stated that "If you've got a Dreamcast and want GP racing, this isn't bad, but we'd much rather play Ubi's Speed Devils instead."

Monaco Grand Prix Racing Simulation 2 was a runner-up for Computer Games Strategy Plus's 1999 "Racing Game of the Year" award, which ultimately went to Dirt Track Racing. The editors wrote, "Superb graphics and excellent vehicle physics are the hallmark of the latest installment in this excellent series."