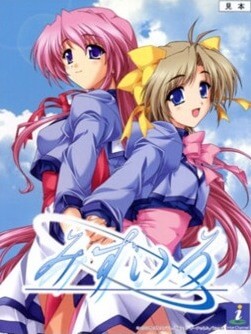 Mizuiro (みずいろ, "light blue") is a visual novel made by NekoNeko Soft released in 2001. It has versions for four different platforms: Windows CD (3 Disc), Dreamcast, PlayStation 2, and Windows DVD-Rom.

Mutsuki Shindou (進藤 むつき Shindō Mutsuki): Yuki's trusted friend. In her story, she is shy. In all other stories, she is very loud and humorous.

Prologue: The player's character is very young, with the story beginning with the meeting of Yuki for the first time and developing a loving sibling relationship although they are not both related in blood as Yuki was adopted.

Pre-Opening: The player makes choices to decide the story of the game, with the players character still very young. The first meeting of Hiyori occurs, who is a lost girl crying in the park. The game then presents the problems of the character that your choices led to.

Game: The players character is in the second year of senior high in the game (grade 11). A story about a character is presented to the player depending on the choices made in the last setting. Each story has a moving or tragic situation.

Voice: Most of the female characters you encounter have a very calm voice, though it depends on the situation.