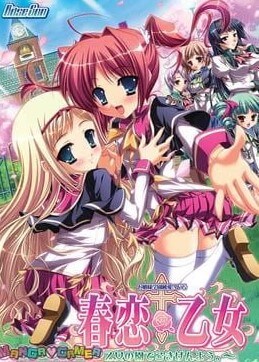 Harukoi Otome: Otome no Sono de Gokigen'yō (春恋＊乙女 ～乙女の園でごきげんよう。～, lit. "Springtime Romance Maidens ~Greetings from the Maidens' Garden~") is a Japanese adult visual novel, developed by BaseSon and released on January 27, 2006. It is playable on Windows as a DVD.

The gameplay includes multiple scenarios with courses of interaction, and focuses on the appeal of the six female characters. Harukoi Otome is BaseSon's fourth title.

Harukoi Otome revolves around protagonist Akihito Hayasaka, a male high-school sophomore. The high school he attends (St. Francesca Academy (聖フランチェスカ学園 Sento Furanchesuka Gakuen)) used to be an all-girls school, and still has a high percentage of female students. Akihito's younger sister (Umi Hayasaka) and his childhood friend (Yuika Serizawa) are also students there. Akihito meets many girls there, and becomes friends with them. Kazuto Hongō (protagonist of BaseSon's fifth title, Koihime Musō) is also a student at St. Francesca; it is also the setting for the Koihime Musō OVA episode.

The characters were designed by Hinata Katagiri and Kishinisen. The scenario was written by Takuya Aoyama, K. Baggio, Shōta Onoue, and Hozumi Nakamoto. The music was composed by Loser Koshiwagi, Torapon, and Bjoern. Hinata Katagiri, K.Baggio, and Shōta Onoue also participated in the development of Koihime Musō.

Harukoi Otome was first released as a limited-edition version for Windows on January 27, 2006. A regular edition followed on December 14, 2007. The game was also adapted into mobile-phone games by Magicseed and Masys.

MangaGamer plans to release an English translation of the game titled Harukoi Otome: Greetings from the Maidens' Garden in 2013.