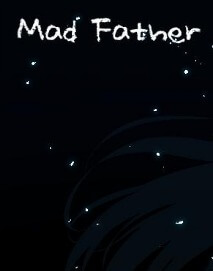 Mad Father (Japanese: マッドファーザー Hepburn: Maddofāzā) is a freeware survival horror role-playing puzzle video game. The game was developed by Japanese developer Sen, published by Miscreant's Room and released on 10 December 2012. The game centers around an 11-year-old girl named Aya, who breaks into her father's secret laboratory to uncover the horrifying truth of his research. A Steam version, published by AGM Playism, was released on 23 September 2016.

Mad Father takes place in northern Germany, where an 11-year old protagonist, Aya Drevis, lives with her parents, Alfred and Monika Drevis, and their maid Maria. Aya is a shy girl who never goes outside. Her mother is incredibly ill, while her father performs secret research in his laboratory in the house's basement, with the assistance of Maria. Both Aya and Monika are aware that Alfred experiments and kills humans in the basement, as well as the fact that he is involved in an extramarital affair with the younger Maria, a former homeless woman he had taken off the street some years prior. At some point, Monika dies, supposedly of illness.

One year later, on the anniversary of Monika's death, Aya awakens at midnight to find herself surrounded by test subjects that escaped from the laboratory. Fleeing back into her room, Aya encounters the mysterious salesman Ogre, who offers her the task of solving puzzles to break into her father's laboratory and uncover his secret. Aya discovers that her father had intended to perform taxidermy on her and convert her into a doll, as he had done to numerous other children, having been enamored with preserving humans after having killed his own mother as a youth.

The game has three endings based on the player's choices. In one ending, Aya allows her mother to take her father away to another world. After returning to the real world, she runs into Maria, who knocks her out, takes her to the basement and then kills her, turning her corpse into a doll. In the second ending, Aya saves her father from being taken by her mother's spirit. However, after doing so, Monika reveals to Aya that Alfred had murdered her. Horrified, Aya flees while being chased by a chainsaw-wielding Alfred. While attempting to escape, she runs into Maria. Maria attempts to follow her, but when she fails to capture her, is attacked by Alfred. The game then branches into two endings depending on Aya's actions; if Aya neglects to help Maria and instead attempts to escape the mansion, she is found by her father and killed, with Alfred performing taxidermy on her corpse and rendering her into one of his dolls. In the true ending, Aya helps Maria, declaring that the two shall henceforth live together. Maria then kills Alfred and the two women leave the mansion, which is burned down by Dio, the spirit of one of Alfred's human test subjects.

As the house burns down, Ogre transports Alfred's spirit to another world, where he is free to experiment to his heart's content, creating a mature adult clone of his daughter, leading into the events of Misao. Meanwhile, while walking away from the burning mansion, Aya notices that her father's medical book has survived the blaze. Some years later, Aya and Maria have created a clinic, where they perform medical services free of charge. A poor woman named Jean Rooney arrives for an examination, and Aya uses anesthesia to render Jean unconscious, claiming that Jean will no longer suffer from her illnesses. In another room, Maria muses that Aya has become just like her father and that the tendencies run in the family, heavily implying that Aya has followed in her father's footsteps.