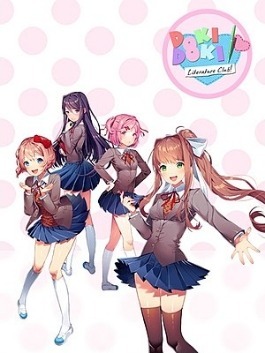 Doki Doki Literature Club! is a 2017 American visual novel developed by Team Salvato for Microsoft Windows, macOS, and Linux. The game was initially distributed through itch.io, and later became available on Steam. The story follows a male high school student who joins the school's literature club and interacts with its four female members. The game features a mostly linear story, with some alternative scenes and endings depending on the choices the player makes. While the game appears at first glance to be a lighthearted dating simulator, it is in fact a metafictional psychological horror game that extensively breaks the fourth wall.

The game was developed in an estimated two-year period by a team led by Dan Salvato, known previously for his modding work for Super Smash Bros. Melee. According to Salvato, the inspiration for the game came from his mixed feelings toward anime, and a fascination for surreal and unsettling experiences. Upon its release, Doki Doki Literature Club! received positive critical attention for its successful use of horror elements and unconventional nature within the visual novel genre, but has also faced criticism for its alleged role in adolescent suicides.

Doki Doki Literature Club! is a visual novel. As such, its gameplay has a low level of interactivity and consists of scenes with static two-dimensional images of characters in a first-person perspective. The narration and dialogue are presented in the form of accompanying text. The narration is provided by the game's protagonist, a member of the titular literature club, to which he was invited by his childhood friend Sayori. At certain points, the player will be prompted to make decisions that determine the course of subsequent events. Such decisions affect the development of the protagonist's relationships with the key female characters Sayori, Yuri, Natsuki, and Monika. The characters' interactions with the protagonist are also influenced by a minigame in which the player is required to compose a poem from a set of individual words. Each girl in the literature club has different word preferences, and will react positively when the player picks a word that they like. The characters' reactions are represented by chibi versions of the characters that are displayed at the bottom of the screen during the minigame. Depending on the results of these minigames, the player can enable additional scenes with the character to whom the poem was dedicated. The narrative is divided into three acts, between which the player must restart the game. At a certain point, the player must access the game's files in order to advance the narrative.

The protagonist is invited by his cheerful childhood sweetheart, Sayori, to join their high school's literature club as a remedy for his insular nature. The protagonist reluctantly agrees to her proposal and meets the other members of the club: the assertive Natsuki, the shy Yuri, and the bubbly club president Monika. The protagonist writes and shares poems with his new club-mates and deepens his relationships with them. As the club prepares for the school's upcoming cultural festival, Sayori reveals to the protagonist that she suffers from depression and confesses her love for him. The following day, Monika passively shows the protagonist an uncharacteristically morbid poem by Sayori that insistently orders someone to get out of her head. Realizing that something has happened to her, the protagonist rushes to Sayori's home, where he discovers that she has hanged herself, and the game abruptly ends.

The player is sent back to the main menu, with all previous save files erased. The narrative repeats upon the start of a new game, but Sayori is glaringly absent; her name and dialogue are rendered illegible, and the characters do not remember her existence. In addition, the character sprites appear corrupted from time to time. Monika takes Sayori's place in inviting the protagonist to the club. Aside from the game's frequent distortions, the normally calm and shy Yuri becomes gradually unstable, possessive and prone to self-harm. Yuri's decline in sanity culminates in the act of giving the protagonist a "poem" that is indecipherable and covered in blood and other bodily fluids. When Monika seems to be callously dismissing this anomalous behavior, Natsuki secretly passes the protagonist a message under the guise of a poem that begs him to seek help for Yuri, only to be immediately manipulated into telling the protagonist to disregard the message and devote his attention solely to Monika. After a heated quarrel over who the protagonist will help with the school festival, Yuri ejects Monika and Natsuki from the room and privately confesses her love for the protagonist. Whether or not the protagonist accepts Yuri's confession, she commits suicide by repeatedly stabbing herself. Due to the game's broken script, the protagonist is stuck motionless in the room with Yuri's decaying cadaver over the course of a weekend. Natsuki returns upon the weekend's conclusion, but is horrified and nauseated by the sight of Yuri's body and flees the scene. Monika appears and apologizes to the protagonist for the "boring" weekend he had spent, and begins a display of compensation by deleting Yuri and Natsuki's character files from the game and sending the player back to the main menu.

A new file is started automatically, and the protagonist is placed in a room with Monika seated across from him. Monika reveals that she is a self-aware video game character who has the ability to manipulate and delete other character files, which she used to alter the behavior of her club-mates in an unsuccessful bid to make them unlikable and prevent their confessions of love to the protagonist. She expresses her loneliness from being relegated to a fruitless supporting role within an empty world where her only company had been "autonomous personalities" designed only to fall in love with the protagonist, and she confesses her own love not to the protagonist character, but directly to the player. Monika will sit and talk to the player indefinitely about various topics until the player manually enters the game's directory and deletes Monika's character file. Monika initially lashes out at the player, but ultimately forgives them and remorsefully repents by restoring the game and the characters excluding herself.

Depending on the course of action taken by the player, the game can come to three possible conclusions. The standard ending sees Sayori introducing herself as the president of the literature club and thanking the player for getting rid of Monika. As she adopts Monika's possessive characteristics, Monika intervenes via text prompt and deletes Sayori to save the player. Monika deletes the game over the course of the credits, and the game concludes with a note from Monika, stating that she has disbanded the literature club because "no happiness can be found" in it.

A more positive ending occurs if the player has viewed all of the optional scenes in a single playthrough, which requires saving and loading at several points before witnessing Sayori's initial suicide. Sayori instead expresses her gratitude to the player for emotionally supporting all the club members, tearfully bids farewell and assures the player that all the club members love them before deleting the game herself. After the credits, the player is presented with a message from the game's developer, Dan Salvato.

If the player preemptively deletes Monika's file from the directory before starting the game, Sayori is made the default leader of the club. Upon realizing the true nature of the game and her role in it, Sayori panics and forcefully closes the game. Opening the game again will display an image of Sayori having hanged herself. If this image is left on screen for ten minutes, a line of text will appear next to Sayori's corpse reading: "Now everyone can be happy."