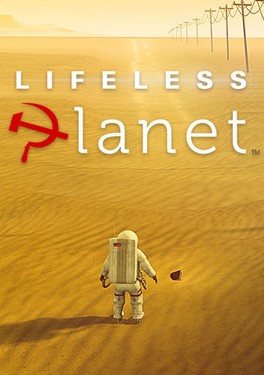 Lifeless Planet is a 2014 puzzle platformer video game developed by independent American company Stage 2 Studios and published by Serenity Forge. The game was released on June 6, 2014 for Microsoft Windows and on June 23, 2014 for OS X, and has been ported to the Xbox One on May 13, 2015, Linux on March 25, 2016 and to the PlayStation 4 on July 19, 2016. Lifeless Planet was in development since 2011 and is primarily the product of the one developer, David Board.

The game follows an astronaut on a trip to another planet that is thought to be filled with lifeforms. The mission is a failure as the ship is lost in the crash, the protagonist is unable to locate other crew members, and the planet turns out to be an enormous wasteland completely devoid of life; however, among the vast emptiness is a derelict Soviet Union science outpost constructed on the planet. The game follows the protagonist as he explores the planet and figures out how the Soviets managed to travel to the planet, and why the outpost is now empty. He explores through the planet only to get flashbacks of life on earth. As he seemingly sinks deeper into madness he finds out he is not alone and the only other survivor is a Russian girl who supposedly is the cure.

The game contains platforming adventure and puzzles to solve. Levels in the game are linear. The gameplay difficulty increases as the game progresses to match up with the player's skills learned from playing the game.

The game was originally planned to be an action platformer, but as development of the story expanded, developer David Board chose to refocus the game to center on the story. The game is inspired by classic adventure games including LucasArts's The Dig and the platform game Another World, as well as by Cold War sci-fi B movies. Board said that he aimed for the game to convey the "combined sense of optimism and dread of what science was capable of in the hands of humankind".

The game was part funded through crowdfunding, launching a Kickstarter campaign in September 2011. The campaign achieved its $8,500 target within 24 hours of going live, and eventually closed with over $17,000 raised. The exposure generated by the campaign helped to secure a publishing deal for the game. Though Board originally intended to release the game in July 2012, delays meant it took until March 2014 for just the Steam Early Access release.

The early access release included the first six chapters of the game, approximately one third of the game's content which corresponds to about two hours of gameplay. PC Gamer described that gameplay as "perfunctory", with some puzzle solutions being extremely obvious, a lot of time spent "just walking", and some gameplay elements feeling "contrived". The final version of the game has around 20 chapters and which was released June 6, 2014. It would also include features not present in early access such as support for OS X, subtitles, and the option for Russian or German language. This game is similar to the work of Aleksey Nikolayevich Tolstoy, Aelita.