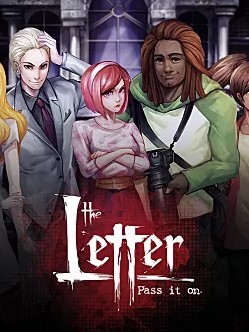 The Letter is a horror visual novel developed and published by Philippine studio Yangyang Mobile for Windows, macOS, Linux, iOS, and Android systems. It was released on July 24, 2017.

The game is divided into seven chapters, spanning over 700,000 words across all routes, and in each chapter the player takes control of one of the protagonists. The game is primarily told in visual novel format, where the player's decisions affect the relationships with the other characters and the different paths that can be taken. Depending on the choices, the player can reach different endings. The game features full English voice acting and some quick-time events that can also be disabled. A branching tree helps to keep track of the progress, while an in-game journal narrates the events in chronological order.

The Ermengarde Mansion, a 17th-century English mansion, is rumored to be cursed by a vengeful spirit. Various disappearances had been linked to the mansion, while people living near the vicinity spoke of seeing and hearing unearthly things. Dismissed as a hoax, the mansion was listed for sale by Briar Realty Corporation. Before its grand opening to the public, Isabella Santos, an agent under BRC, was double-checking the place when she accidentally uncovered a disturbing letter, setting a series of horrible events into motion.

The game was inspired by Japanese horror films Ju-on: The Grudge and The Ring, the Korean webcomic, Bongcheon-Dong Ghost, and by horror Japanese role-playing games such as Mad Father and Corpse Party. It was funded via Kickstarter with $33.946 from 518 backers, surpassing the funding goal of $30.000. A free spin-off titled The Diary was released in February 2016 for Android and later iOS. The game is a prequel and contains diary entries from Rebecca Gales, one of the protagonists of The Letter.  Several voice actors worked on this game, including Amanda Lee as Isabella Santos, who also sings the theme song "Letters Goodbye", Melissa Sternenberg as Rebecca Gales, Howard Wang as Ashton Frey, Anthony Sardinha as Zachary Steele, Amber Lee Connors as Hannah Wright, Curtis Arnott as Luke Wright, and Elsie Lovelock as Marianne McCollough.

The game received mixed to positive reviews. Chloe Spencer from Kotaku said, "Despite some of its issues, the replay value and the excellent animations and artwork make it a fun experience." Jarren Navarrete from Sirus Gaming gave a rating of 9 out of 10, calling the game "a must have experience for horror fans alike."

Lori May from Bonus Stage gave a rating of 6 out of 10, saying "Diehard fans of Visual Novels and/or Japanese anime style titles might find this one worth their time, especially if they enjoy mild Horror themes." Jonathan Kevin Castillo from GameGulp gave the rating "lukewarm" and said, "It's a brave effort for YangYang Mobile to craft a game like this. And while The Letter has its flaws, the horrors and jump scares of this visual novel are worth the experience."