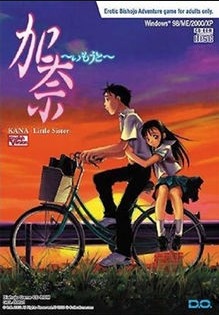 Kana: Little Sister (加奈～いもうと～ Kana～Imōto～), is a Japanese visual novel originally developed and released by D.O. in 1999. G-Collections translated and published the English version in 2002.

The story of Taka and his little sister Kana is told from Taka's perspective, starting when Kana is just about to start high school and then delving into the past to explore the relationship between the two siblings.

The game is a visual novel, displaying scenery and characters in the background while the characters' dialogue and Taka's narration are displayed as text. Music and sound effects are also used. The unhurried narration is intended to allow the player to identify with Taka (and Kana) as the story unfolds.

Over the course of the game, the player is presented with approximately 30 decision points which determine which path the storyline will follow and, ultimately, which ending the player will achieve.

Kana: Little Sister is an eroge and contains sex scenes. It is only sold in a few online stores. Because of its limited availability, the game is relatively unknown among American and European gamers. However, the English translation can still be purchased through sites like Amazon.com or Jlist.com

The game was originally developed for Windows. A Mac OS version was subsequently published in 2001. In 2003, Panther Software announced plans to release an Xbox port, which was ultimately cancelled in May 2005 after multiple delays.

The original versions published by D.O. are now out of print. A revival Windows edition was released in 2004 under the title Kana...Okaeri‼ (加奈⋯おかえり！！—"Kana…Welcome Home!"). This new version retains the original storyline but features new character designs and full voice acting. An English translation of Kana Okaeri was released in 2015 by JAST USA.

In 2010, the game was ported to the PlayStation Portable with the adult scenes removed. It featured the character designs and artwork from the original PC version of the game, along with new artwork specifically created for the PSP version.

The game has six different endings. The player's choices during the game determine the direction of the story and the ending achieved at the end. These choices also determine the nature of the relationship between Kana and Taka, as well as Kana's life.