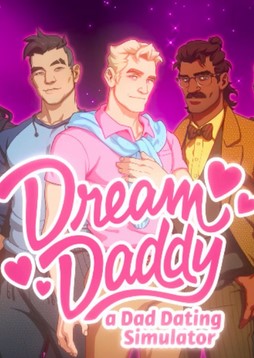 Dream Daddy: A Dad Dating Simulator is a visual novel video game released on July 20, 2017 for Microsoft Windows and macOS, and on September 22, 2017 for Linux. The game was developed and published by Game Grumps and written by Vernon Shaw and Leighton Gray. The expanded Dadrector's Cut was released for the PlayStation 4, along with an update for the PC version, on October 30, 2018. It was released on Nintendo Switch on July 2, 2019.

Dream Daddy is an interactive visual novel where the player can choose between seven different fathers they can date. Included are mini-games to complete, multiple endings and voice acting by members of the show Game Grumps. The player is able to customize the appearance of their player character.

The game follows a lonely single father who has just moved to Maple Bay with his daughter, Amanda. On the cul-de-sac where he lives, most of the fathers are single, and the player has the option of romancing them. The fathers available to romance are Mat Sella, Craig Cahn, Hugo Vega, Brian Harding, Damien Bloodmarch, Robert Small, and Joseph Christiansen.

Vernon Shaw, the co-creator and co-writer for Dream Daddy, met the Game Grumps while he was working as a talent manager for Maker Studios. Maker Studios was the Game Grumps' channel network from June 2013 to January 2016. The idea for the game came from a joke Vernon and co-creator Leighton Gray made about dads visiting Disneyland, and the inspiration to make a dad dating sim came from the pigeon-dating visual novel Hatoful Boyfriend.

The development of Dream Daddy started after the proposal of the game by Shaw to Arin Hanson, to which Hanson immediately approved. Tyler Hutchinson, the director, and Jory Griffis, the narrative designer, were hired in fall of 2016. The original plan for the game was to have development be done in around 9 months in time for a Father's Day 2017 release, but this proved to be too difficult. Dream Daddy was announced on June 18, 2017, with a 45 second-long teaser trailer uploaded on the Game Grumps' alternate channel GrumpOut. On July 14, 2017, it was announced that the game's release would be delayed due to the discovery of some last-minute bugs, and would miss its original release date of July 13, 2017. It was given a new date of July 19, 2017, only to be delayed again. It finally came out on July 20, 2017. A Dadrector's Cut of the game, featuring additional sidequests and minigames, was released on the PlayStation 4 and launched as free update to the PC version on October 30, 2018.

Initially, Hutchinson and Griffis thought the game was too linear and told Vernon and Leighton to look to the 1994 game Tokimeki Memorial for inspiration on system-driven dating sims. After systems-based gameplay was installed, the player did not just play for the dads' affection but play to a point where they could be "cool" or "erudite" enough for the dads' affection. Narrative paths became more character driven and logic-based as development went on. The word count for the game would be around 133,000 when development was over.

A philosophy used by Vernon Shaw while developing the game was "sincerity wrapped in cynicism", meaning the player would play the game because of the intrigue about gay dads but walk away with life lessons about fatherhood and relationships. Griffis recalls the switch from the game being about dads having sex to being about relationships came towards the end of development when character arcs had been fully established. The lack of references by characters to their sexual orientation came from the developers feeling that most media dealing with queer people was about societal issues and not about the relationships themselves. Instead, the game deals with issues like social anxiety and toxic masculinity.