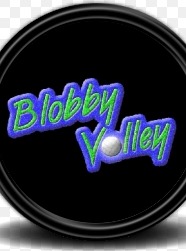 
Blobby Volley is a free and open-source sports computer game series in which two blobbed shaped entities play volleyball against each other. There are multiplayer and also single player game modes.

The rules used in Blobby Volley are derived from the standard volleyball rules. Unlike real volleyball, the movements of the players are limited to the two-dimensional space of the screen. The borders of the screen acts as an invisible wall which the ball bounces off, which is completely legal to use. Since there is only one player on each side of the field, it is permitted (unlike standard volleyball) for the player to touch the ball several times in a row.

The protagonists, blob like creatures without arms, can move left and right, jump and interacting with the ball by hitting it with their "head", therefore resembling a Header like gameplay.

The game ends when one of the two players reach 15 (or more) points and also there is a two-point lead over the other. Points may only be achieved by the player that serves the ball. Therefore, each of the players tries to make the other one commit a fault so they can serve and score points. A player can commit the following faults:

The ball touches the ground in their own field

There are community made mods available for the game. For instance Quick Game which is a modification for Blobby Volley which speeds up the game and reduces the winning number of points to 10.

Blobby Volley was originally written in Delphi by Daniel Skoraszewsky with graphics by Silvio Mummert. Version 1.0 was released in November 2000 on the authors' homepage as Freeware for PCs with Windows. Development ended around 2005 with version 1.8.

The Blobby Volley series became quite popular freeware game, either as single player casual game and also as competitive tournament game on LAN parties, for instance the GameCon. There is an online Sports league, running since several years organized by the community.

It is offered from many freeware download outlets, for instance it was downloaded between 2007 and May 2017 alone from Sourceforge.net over 700,000 times, Chip.de counted over 1 million downloads (at May 2017). Blobby Volley was also included on several video game magazines' cover disks with freeware game compilations, for instance CD-Action 1/2007, GameStar 01/2012, or the Open Source Software CD. The game is also included in several Linux distributions, for instance Ubuntu OS.