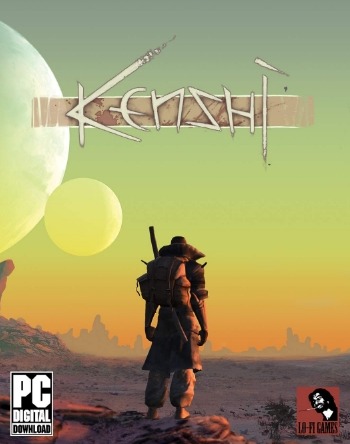 Kenshi is a role-playing video game developed and published by Lo-Fi Games for Windows. The game focuses on providing sandbox gameplay features that give the player freedom to do what they want in its world instead of focusing on a linear story. Kenshi's development was primarily led by a single person over the course of twelve years, and was released on December 6, 2018.

Kenshi takes place in a post-apocalyptic setting and allows characters to be a thief, a trader, or a myriad of other options. The game has received mostly positive reviews from critics, who have commented on its depth, its MMO-style gameplay, and its difficulty.

Kenshi is an open world role-playing video game with real-time strategy elements that has no linear narrative. It takes place in a post-apocalyptic fantasy setting, where it is incredibly difficult for life to survive. The player starts out with no skills and struggles to survive in the early stages of the game. Skills are leveled up through doing actions, such as leveling up thievery by stealing items, and the player can recruit other units to grow their squad. The player can recruit people to join their squad in bars, and can eventually build a town or a city themselves. As part of the damage system, limbs can be severed or damaged individually as well.

Kenshi was primarily developed by a single person, Chris Hunt, who began development around 2006–2008. Hunt worked as a part-time security guard in order to make ends meet for the first few years of the game's development. After five or so years of working his security job, Hunt was able to leave his part-time job and work on the game full-time after finding initial success with the game. He worked by himself on the project until 2013, when he was able to hire a small team that works with him on the project. Hunt has described the world as "sword-punk", and was specifically inspired by stories of wandering rōnin and the idea of a survivor travelling a wasteland.

Hunt has described his impetus for creating the game as his dislike of the "hand-holding" that other RPGs have when starting out. On his general mantra for designing the game, Hunt stated that he considered himself as the player's enemy. The game's playable area is 870 square kilometres (340 sq mi), which was done to place dangerous and challenging areas in between rewards that players might seek out. Hunt wanted different areas of the map to have different themes or factions that would make them feel unique, such as one that treats female characters differently than males.

Kenshi has received "generally favorable reviews" from critics, according to review aggregator Metacritic. PC Gamer's Robert Zak praised giant size and scope, but noted that the game could get "grindy" and that the game's UI "can get cumbersome as your group's numbers grow." Rock, Paper, Shotgun noted the game's depth and compared Kenshi positively to Dwarf Fortress.

As of March 20, 2019, Kenshi 2 was officially announced. A release date or time frame for release is still unknown.